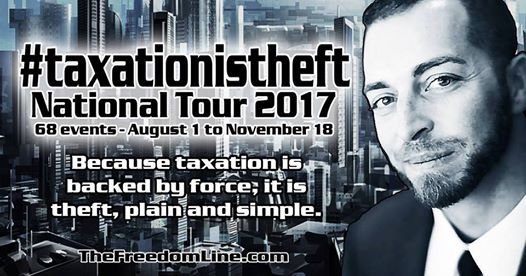 It's been a while. Members of the Freedom Team and myself have been working tirelessly to organize both our non-profit and the not-campaign for 2018 in preparation for 2020. We're finishing up the #taxationistheft tour and it's been amazing to see so many people show up to support our efforts. Here's an update on what's been going on and what's coming:

We have eight people on staff, five of whom are with us on the tour with us, a class A RV we've named "No Force One" (wrap coming soon), and a strategy and infrastructure in place to take over the 2018 convention.

We've hit over 55 stops so far on the taxation is theft tour, raising signatures in our drive to take over the convention.

The drive for 985. That's a drive for 985 national Libertarian Party delegates who believe in localizing government whenever possible and uniting Americans against our common enemy: involuntary, centralized government. This is how we prepare for 2020, by re-introducing these concepts to the party. We've signed up thousands of aspiring delegates so far and we'd love for you to join us!

If you didn't get to sign up at one of our events on the #taxationistheft tour please sign up under your state in the forums!

We are currently updating thefreedomline.com, publishing the not-campaign (soon to be officially a campaign) website, developing a weekly podcast, adding new items to our store, looking to offer more written content, partnering with fellow activists, and reaching out to new groups and audiences. We are building the coalition to take down the biggest empire the world has ever known.

Follow us on facebook, on steemit, on the tour steemit, dtube, youtube (now demonitized), instagram, and on our upcoming email lists.
In the coming weeks you will receive emails informing you of ways to support our efforts and asking you what mailing lists you would like to be a part of beside the main newsletter.

We're going to fulfill the promise of the first American Revolution and #FinallyFreeAmerica! Stay tuned and thank you all for your support throughout my years of activism!

News Link • Adam vs The Man