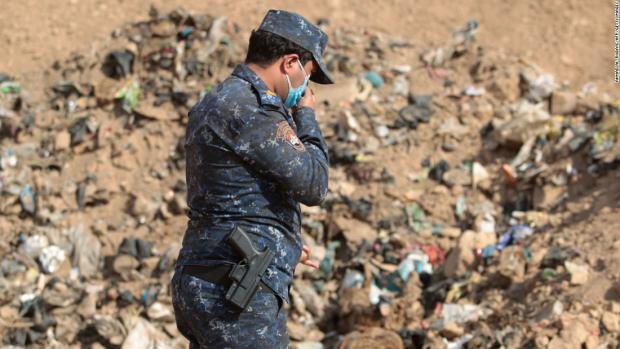 Pentagon terror-bombing is ravaging Mosul, destroying its infrastructure, massacring its people - on the phony pretext of liberating the city from US-supported ISIS terrorists.

Hundreds of thousands of Iraqi civilians are threatened. A bloodbath already claimed many lives. Endless horrors continue - including atrocities committed by CIA-trained and supported ISIS fighters.

The location was discovered about "five miles outside Mosul…believed to be the biggest mass grave in Iraq…bodies of thousands of security personnel" dumped after US-supported ISIS terrorists took control of the city in 2014.

According to witnesses, victims were shot and dumped into a huge pit, "others perished in vehicles driven over the edge," a witness identified only as Mahmoud saying:

"Daesh would drive the victims to Khasfa in convoys of minibuses, trucks and pick ups. The men had their hands bound and their eyes blindfolded."

"They were taken to the sinkhole and shot in the back of the head," others shoved over the edge. A Daily Telegraph reporter visited the site after Iraqi forces recaptured the area.

The Khasfa body count exceeds the mass-murder of about 1,700 Iraqi air force cadets in a June 2014 ISIS attack on Camp Speicher military base near Tikrit.

The sinkhole is huge, about 400 meters deep. According to Mahmoud, "(i)n the beginning, you couldn't see the corpses at the bottom of the hole. Only later, when it began to fill up, you could see the bodies."

ISIS massacred around 2,000 Iraqi police and soldiers in one day alone, he explained.

The battle for Mosul continues, hundreds of thousands of Iraqi civilians in harm's way.

Unlike humanitarian corridors Russia established for the evacuation of Aleppo civilians, America did nothing similar for Mosul residents.

The city is Iraq's second largest with a population of around 1.3 million. Reportedly around 800,000 civilians remain trapped.

The western part of the city is cut off from food, water, fuel, electricity and medical aid. UNICEF said most residents are forced to drink untreated water from polluted sources.