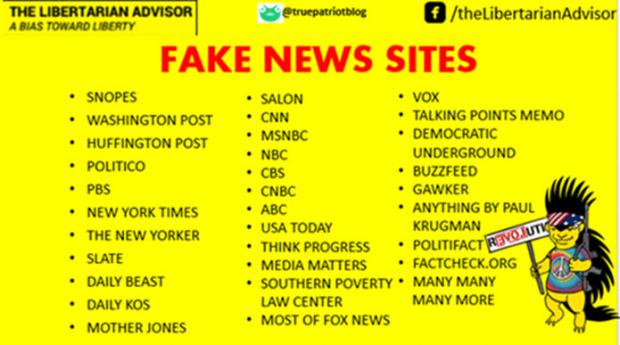 I'm sure most of you have seen the Fake News Site list that has been going around social media the past few days.  The media is incensed that the supposed 'alt' right was able to break through the dying mainstream media's Berlin wall of lies to expose their demi-God.

One Ultra liberal professor, Melisssa Zimdars, caught wind of the hysteria and took it upon herself to create her own "non-biased" list o fake websites.

Here are the criteria to be deemed a fake site according to Zimdars as well as the list of actual "Fake" Sites.

CATEGORY 1: Below is a list of fake, false, or regularly misleading websites that are shared on Facebook and social media. Some of these websites may rely on "outrage" by using distorted headlines and decontextualized or dubious information in order to generate likes, shares, and profits. These websites are categorized with the number 1 next to them.

CATEGORY 2: Some websites on this list may circulate misleading and/or potentially unreliable information, and they are marked with a 2.

CATEGORY 3: Other websites on this list sometimes use clickbait-y headlines and social media descriptions, and they are marked with a 3.

CATEGORY 4: Other sources on this list are purposefully fake with the intent of satire/comedy, which can offer important critical commentary on politics and society, but have the potential to be shared as actual/literal news. I'm including them here, for now, because 1.) they have the potential to perpetuate misinformation based on different audience (mis)interpretations and 2.) to make sure anyone who reads a story by The Onion, for example, understands its purpose. If you think this is unnecessary, please see Literally Unbelievable.

Some of my favorites include: Lew Rockwell; Project Veritas, Infowars / Prisonplanet, LibertyTalk.fm, Natural News, Conservative Outfitters, Ending the Fed, The Free Thought Project, Breitbart, Coast to Coast AM,  Red State, and last but not least Zerohedge.

Funny how almost no ultra liberal sites are on the list.

In the wake of the WikiLeaks and Project Veritas bombshells the media's collusion has never been more apparent.  Zerohedge.com which is a site I visit daily reported the following.

Perhaps Zimdars missed this John Podesta email exposing Arianna Huffington blatantly colluding with the Hillary campaign to "echo their message without any perceived conflicts."  Or, maybe this was just dismissed as useless Russian propaganda?

"She is enthusiastic abt the project but asks if she's more useful to us not being on the Board and, instead, using Huffpo to echo our message without any perceived conflicts. She has a point."

It is incredible that none of the MSM is on this list.  The media went on an all out offensive against President-Elect Donald Trump and dropped any pretext of media objectivity in the process. Their lies and propaganda would even make William Randolph Hearst Blush.  The media used the entire 1984 playbook but still fell victim to the thousands of activists who worked tirelessly to expose the Clinton Crime Syndicate.

Ultimately the proposals by Google and Facebook are incredibly scary.   They, along with nut jobs like Zimdars get to play judge, jury and executioner and in the process silence their opposition while cutting off their income.  It is amazing how actual fascism and propaganda are being perpetuated by the same people who are claiming Trump supporters are Fascist.   Lucky for Zimdars, I have taken it upon myself to create my own fake news list.

I didn't have time to list them all, but please let me know of notable ones I missed in the comments.

And now enjoy this fantastic skit to help rub salt in the liberal's wounds while we enjoy some more "fake" news.