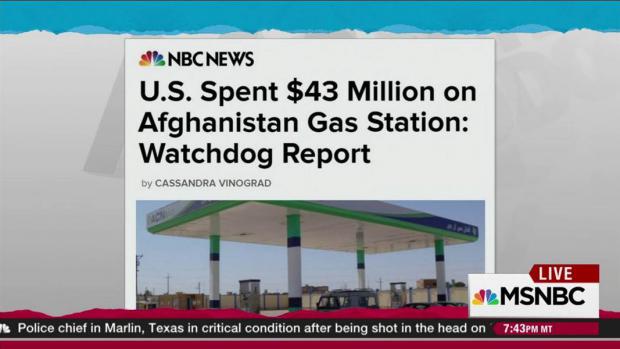 Remember earlier reports about $7,600 coffee makers, $640 toilet seats, $436 dollar hammers and numerous other US military items, including hugely overpriced weapons systems, some for ones never used or don't work.

The Pentagon is a notorious sinkhole of waste, fraud and abuse. Trillions of dollars are unaccounted for. Oversight is entirely lacking. America's war machine does what it pleases.

Since 1996, the Defense Department was never held accountable for over $8.5 trillion. Sweetheart deals, bribes and kickbacks are commonplace. So is routine over-billing.

It doesn't surprise to hear about another boondoggle - a US built Afghan natural gas station costing around $43 million. The Special Inspector General for Afghanistan Reconstruction (SIGAR) said its cost was 140 times its real value.

So where did the extra money go? Millions of dollars were wasted and/or stolen. Pentagon officials refused to explain. Someone profited hugely at US taxpayer expense.

Special inspector general John Sopko called it an "outrageous waste of money that raises suspicions that there is something more there than just stupidity. (It smacks of outright) fraud…corruption (b)ut I cannot currently find out more about this because of the lack of cooperation."

After 14 years of US occupation, conditions are more deplorable than ever for the vast majority of Afghans, essentials to life denied or in too limited supply for millions.

SIGAR said a feasibility study would have shown Afghanistan lacks the needed distribution infrastructure to make a market for natural gas possible.

In 2011, Central Asian Engineering was awarded a $3 million contract anyway, ballooned to nearly $43 million by 2014. Sopko called the boondoggle "one of the worst examples of poor planning and just sheer stupidity."

Awarding it reflects gross "mismanagement. (M)ore serious is the lack of DOD oversight and documentation." When something exceeds expected costs by this amount, "(i)t raises suspicions."

Congress appropriated over $820 for TFBSO from 2010 to 2014 - for economic development projects. SIGAR said DOD "hindered" its review process - responding to its requests for information, saying it lacked the "personnel expertise" to comply because a task force handling it was closed down last March.

Sopko scoffed at the comment, saying they claim "they can't find anybody (knowledgeable) about a billion dollar program. I never encountered anything like this…It's sort of like - poof! The program disappeared and with it all recollection and memory."

"There are few things in this job that literally make my jaw drop," she said. "But of all the examples of wasteful projects in Iraq and Afghanistan that the Pentagon began prior to our wartime contracting reforms, this genuinely shocked me. It's hard to imagine a more outrageous waste of money than building an alternative fuel station in a war-torn country" costing tens of millions over budget.

McCaskill is a former Missouri state auditor. She demanded DOD provide her committee with a full accounting of the project - including officials associated with it and all related documents.

No matter what actions Congress takes, Pentagon waste, fraud and abuse continue out-of-control, trillions of dollars down a black hole of corruption and unaccountability.