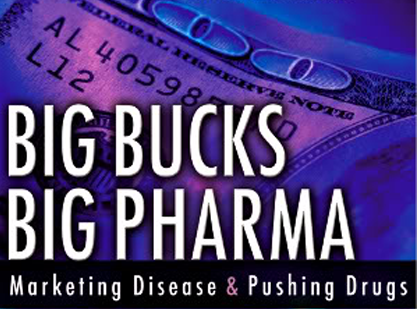 US drug and biotech companies are licensed to steal, bottom line priorities their sole interest, public welfare be damned.

Big Pharma is hated for good reason. Its member companies charge the way MBA students are taught - according to what the market will bear. Grab all you can - with full government support, profits over people. It's the American way.

Illicit drug traffickers look good by comparison. Big Pharma rips off every dollar possible. Their practices are unrestrained unless or until consumers vote with their pocket books, choose alternate products whenever possible or none when they're not needed, many times the case.

Pill-popping is a national addiction. Got an ache, pain or emotional distress? Get a prescription. Use freely. Consumers know little or nothing about potential harmful drug side effects, especially when taken longterm. Whenever possible avoid them. Use only as prescribed as needed, when alternate remedies won't work.

The American Medical Association and likeminded groups are hugely anti-consumer. They deplore natural/alternative choices - challenging their monopoly grip on US medical practice. The corporate run FDA operates the same way.

In 1987, US District Court Judge Susan Getzendanner ruled against the AMA and 10 co-defendants for participating in a conspiracy against chiropractors, finding them guilty of violating federal anti-trust laws.

Western medicine is hooked on drugs - heavily influenced by Big Pharma funding. The AMA and other medical associations depend on it. Medical education features drug use.

Some products advertised in medical journals, consumer publications and television are potentially extremely harmful to health. Solve one problem. Create a greater one. Yet these drugs are frequently prescribed - why patients always need to use their own best judgment.

Sometimes the best treatment is none at all. Good nutritional practices, avoiding GMOs and junk foods, along with daily exercise comprise a marvelous prescription for good health.

In my senior years, I'm grateful for wonderful medical providers I'd be lost without - competent, caring and thorough professionals, prescribing only what's needed in minimum doses for effectiveness, monitoring for results and potential problems, adjusting treatments accordingly.

Medicare Part D drug coverage is a kafkaesque scheme scamming seniors - passed by Congress in the middle of the night after members initially rejected it. Heavy Big Pharma and AARP lobby pressure along with bribes made the difference, costing consumers billions of dollars annually.

Healthcare is a fundamental human right. In 1996, addressing the Medical Committee for Human Rights convention, Martin Luther King said "(o)f all the forms of inequality, injustice in health care is the most shocking and inhuman." Universal coverage alone works equitably for everyone.

Americans are forced to pay more than double per capita for healthcare, compared to consumers in other developed countries, a national disgrace because Washington is beholden to Big Pharma, insurers and large hospital chains.

The World Health Organization ranks America 37th in delivering healthcare for its people - behind EU countries, Japan, Singapore, Iceland, several Middle East nations, Canada and Costa Rica, among many others - a shocking indictment of a failed system in the world's richest country, proper healthcare unaffordable for growing millions, low income households harmed most.

Contrast Cuba's system to America's. Article 50 of its Constitution mandates universal coverage for all its citizens, guaranteed by the state. Everything related to healthcare is free, a model program, caring for sick and injured people in need.

Venezuela operates the same way, what all just societies should do. Healthcare isn't a commodity. It's a fundamental human right. The same holds for education. Not in America, a nation run on the ability to pay, affordability be damned.

Taxpayer funded research covers most costs for many leading drugs. The industry is America's most profitable - as a percent of sales, around threefold higher than other businesses.

Far more is spent on advertising and marketing than R & D. Price gouging is scandalous. In 2014, spending for medications in America was an astonishing $374 billion.

Turing Pharmaceuticals is Exhibit A - overnight increasing the price of its Daraprim malaria/AIDS associated opportunistic infection medication from $12.50 to $750 per pill, a 5,000% hike.

Other industry bandits operate the same way. Rodelis Therapeutics raised the cost of its Cycloserine med from $15 to $360 a pill. Mass outrage forced it to rescind the hike, a rare exception proving the rule. A topical med I need is about 500% more expensive than a few years ago. Thankfully, my dermatologist found a much less expensive substitute.

Drug bandits do what they please, fully supported by Washington, doing nothing to curb their abuses.

Big Pharma leads all other industries in price gouging. Grand theft is prioritized. Unaffordability for growing millions means needless pain and suffering - for some, early death.