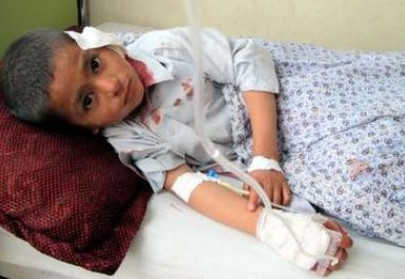 America has precision munitions, able to hit targets with pinpoint accuracy. Its forces knew the coordinates of the Kunduz, Afghanistan hospital.

The only plausible explanation for what happened was cold, calculated, deliberate murder. US warplanes bombed the hospital for over an hour - the first strike at 2:10AM.

Multiple US air strikes were willful acts of murder, likely targeting nearby Taliban fighters, maybe injured ones inside, or perhaps another reason yet to be revealed.

At least 19 were killed - 12 MSF  staff and 7 patients, including three children. NATO spokesman Col. Brian Tribus lied claiming the "incident is under investigation."

The main hospital building was engulfed in flames. Patients unable to escape were immolated in their beds. US commanders ordered the hospital attacked. They had precise coordinates to avoid striking it. Its standard MSF practice in conflict theaters to provide them.

The facility was the area's only hospital. Much of it lies in ruins. Thirty-seven people were injured, including 19 MSF staff, another 30 still unaccounted for.

In 2014, the facility treated over 22,000 patients pro bono, including over 5,900 requiring surgery, many to repair their war-shattered bodies, numerous others to save their lives. No one needing care was turned away, regardless of "ethnicity, religious beliefs or political affiliation," said MSF.

It's been working in Afghanistan since 1980 - opening the Kunduz Trauma Center in August 2011.

Surviving doctors and staff desperately tried saving as many lives as possible after America's attack - using a makeshift operating room in an undamaged area. Other critically injured patients were sent to a Puli Khumri hospital, a two-hour drive away.

MSF said "(b)esides resulting in the deaths of our colleagues and patients, this attack has cut off access to urgent trauma care for the population in Kunduz at a time when its services are most needed."