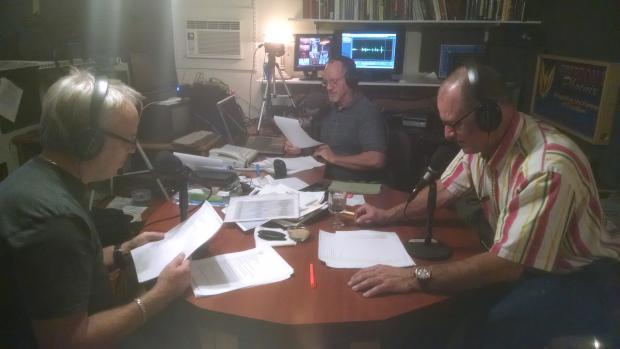 (Four well-dressed men sitting together at a vacation resort. 'Farewell to Thee' being played in the background on Hawaiian guitar.)

Terry Jones: You're right there Obediah.

EI: Without milk or sugar.

MP: In a filthy, cracked cup.

GC: The best WE could manage was to suck on a piece of damp cloth.

TJ: But you know, we were happy in those days, though we were poor.

MP: Aye. BECAUSE we were poor. My old Dad used to say to me, 'Money doesn't buy you happiness.'

EI: 'E was right. I was happier then and I had NOTHIN'. We used to live in this tiiiny old house, with greaaaaat big holes in the roof.

GC: House? You were lucky to have a HOUSE! We used to live in one room, all hundred and twenty-six of us, no furniture. Half the floor was missing; we were all huddled together in one corner for fear of FALLING!

TJ: You were lucky to have a ROOM! *We* used to have to live in a corridor!

MP: Ohhhh we used to DREAM of livin' in a corridor! Woulda' been a palace to us. We used to live in an old water tank on a rubbish tip. We got woken up every morning by having a load of rotting fish dumped all over us! House!? Hmph.

EI: Well when I say 'house' it was only a hole in the ground covered by a piece of tarpolin, but it was a house to US.

GC: We were evicted from *our* hole in the ground; we had to go and live in a lake!

TJ: You were lucky to have a LAKE! There were a hundred and sixty of us living in a small shoebox in the middle of the road.

MP: You were lucky. We lived for three months in a brown paper bag in a septic tank. We used to have to get up at six o'clock in the morning, clean the bag, eat a crust of stale bread, go to work down mill for fourteen hours a day week in-week out. When we got home, our Dad would thrash us to sleep with his belt!

GC: Luxury. We used to have to get out of the lake at three o'clock in the morning, clean the lake, eat a handful of hot gravel, go to work at the mill every day for tuppence a month, come home, and Dad would beat us around the head and neck with a broken bottle, if we were LUCKY!

TJ: Well we had it tough. We used to have to get up out of the shoebox at twelve o'clock at night, and LICK the road clean with our tongues. We had half a handful of freezing cold gravel, worked twenty-four hours a day at the mill for fourpence every six years, and when we got home, our Dad would slice us in two with a bread knife.

EI: Right. I had to get up in the morning at ten o'clock at night, half an hour before I went to bed, (pause for laughter), drink a cup of sulphuric acid, work twenty-nine hours a day down mill, and pay mill owner for permission to come to work, and when we got home, our Dad and our mother would kill us, and dance about on our graves singing 'Hallelujah.'

MP: But you try and tell the young people today that... and they won't believe ya'.

A customer enters a pet shop.

Customer: 'Ello, I wish to register a complaint.

(The owner does not respond.)

Owner: What do you mean "miss"?

C: Never mind that, my lad. I wish to complain about this parrot what I purchased not half an hour ago from this very boutique.

C: Look, matey, I know a dead parrot when I see one, and I'm looking at one right now.

C: The plumage don't enter into it. It's stone dead.

(shouting at the cage)

'Ello, Mister Polly Parrot! I've got a lovely fresh cuttle fish for you if you show...(owner hits the cage)

C: No, he didn't, that was you hitting the cage!

(Takes parrot out of the cage and thumps its head on the counter. Throws it up in the air and watches it plummet to the floor.)

C: Now that's what I call a dead parrot.

O: Yeah! You stunned him, just as he was wakin' up! Norwegian Blues stun easily, major.

C: Um...now look...now look, mate, I've definitely 'ad enough of this. That parrot is definitely deceased, and when I purchased it not 'alf an hour ago, you assured me that its total lack of movement was due to it bein' tired and shagged out following a prolonged squawk.

C: Look, I took the liberty of examining that parrot when I got it home, and I discovered the only reason that it had been sitting on its perch in the first place was that it had been NAILED there.

O: Well, o'course it was nailed there! If I hadn't nailed that bird down, it would have nuzzled up to those bars, bent 'em apart with its beak, and VOOM! Feeweeweewee!

'E's a stiff! Bereft of life, 'e rests in peace! If you hadn't nailed 'im to the perch 'e'd be pushing up the daisies!
'Is metabolic processes are now 'istory! 'E's off the twig!
'E's kicked the bucket, 'e's shuffled off 'is mortal coil, run down the curtain and joined the bleedin' choir invisibile!!

O: Well, I'd better replace it, then.

(he takes a quick peek behind the counter)

O: Sorry squire, I've had a look 'round the back of the shop, and uh, we're right out of parrots.

O: Look, if you go to my brother's pet shop in Bolton, he'll replace the parrot for you.

The customer enters the same pet shop. The owner is putting on a false moustache.

O: (with a fake mustache) No, it's Ipswitch.

C: (looking at the camera) That's inter-city rail for you.

The customer goes to the train station.

He addresses a man standing behind a desk marked "Complaints".

Attendant: I DON'T HAVE TO DO THIS JOB, YOU KNOW!!!

A: I'm a qualified brain surgeon! I only do this job because I like being my own boss!

C: Excuse me, this is irrelevant, isn't it?

A: Yeah, well it's not easy to pad these python files out to 200 lines, you know.

C: Well, I wish to complain. I got on the Bolton train and found myself deposited here in Ipswitch.

C: (to the camera) The pet shop man's brother was lying!!

A: Can't blame British Rail for that.

C: In that case, I shall return to the pet shop!

C: I understand this IS Bolton.

C: You told me it was Ipswitch!

O: No, no...not a pun...What's that thing that spells the same backwards as forwards?

C: It's not a palindrome! The palindrome of "Bolton" would be "Notlob"!! It don't work!!

C: I'm not prepared to pursue my line of inquiry any longer as I think this is getting too silly!

A man walks into an office.

Man: (Michael Palin) Ah. I'd like to have an argument, please.

Receptionist: Certainly sir. Have you been here before?

Man: No, this is my first time.

Receptionist: I see. Well, do you want to have the full argument, or were you thinking of taking a course?

Man: Well, what would be the cost?

Receptionist: Well, It's one pound for a five minute argument, but only eight pounds for a course of ten.

Man: Well, I think it's probably best if I start with the one and then see how it goes from there, okay?

Receptionist: Fine. I'll see who's free at the moment.

Man: Thank you. (Walks down the hall. Opens door.)

Angry man: DON'T GIVE ME THAT, YOU SNOTTY-FACED HEAP OF PARROT DROPPINGS!

A: SHUT YOUR FESTERING GOB, YOU TIT! YOUR TYPE MAKES ME PUKE! YOU VACUOUS TOFFEE-NOSED MALODOROUS PERVERT!!!

M: Yes, but I came here for an argument!!

A: (under his breath) stupid git.

(The man goes into room 12A. Another man is sitting behind a desk.)

Man: Is this the right room for an argument?

Other Man:(John Cleese) I've told you once.

Man: No you haven't!

Other Man: Yes I have.

O: Oh I'm sorry, is this a five minute argument, or the full half hour?

M: Ah! (taking out his wallet and paying) Just the five minutes.

M: You most certainly did not!

O: Now let's get one thing quite clear: I most definitely told you!

M: You just contradicted me!

M: You did just then!

M: (exasperated) Oh, this is futile!!

M: I came here for a good argument!

O: AH, no you didn't, you came here for an argument!

M: An argument is a connected series of statements intended to establish a proposition.

O: Look, if I *argue* with you, I must take up a contrary position!

M: No it ISN'T! Argument is an intellectual process. Contradiction is just the automatic gainsaying of anything the other person says.

(The Arguer hits a bell on his desk and stops.)

O: I'm sorry, the five minutes is up.

O: I'm sorry, I'm not allowed to argue any more.

O: If you want me to go on arguing, you'll have to pay for another five minutes.

M: But that was never five minutes just now!
Oh Come on!
Oh this is...
This is ridiculous!

M: Oh all right. (takes out his wallet and pays again.) There you are.

O: I told you, I'm not allowed to argue unless you've paid!

M: I don't want to argue about it!

M: Ah hah! Well if I didn't pay, why are you arguing??? Ah HAAAAAAHHH! Gotcha!

M: Yes I have! If you're arguing, I must have paid.

O: Not necessarily. I *could* be arguing in my spare time.

M: I've had enough of this!

1 Comments in Response to The Four Yorkshireman, Dead Parrot, and The Argument - ENJOY!!

This was indeed funny. No it wasn't. Yes, it was. What do u think?