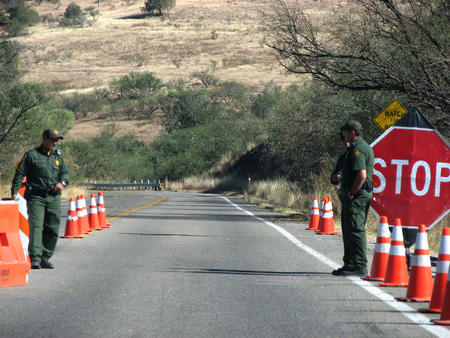 Showing both courage and integrity, the video above depicts an active duty Border Patrol agent speaking out against the unlawful actions of fellow agents at so-called internal immigration checkpoints in Southern California.

Mike Flanders went public with his allegations of Border Patrol misconduct at internal checkpoints after his attempts at redress within CBP (Customs and Border Protection) were rebuffed. Not only were his concerns marginalized by his chain of command but his duties at the Interstate-8 checkpoint near Pine Valley were suspended and he was reassigned to roving patrol while an internal investigation and other adversarial actions were initiated against him.

Agent Flanders' exclusive interview with San Diego 6 can be seen here along with the news agency's followup piece here. What's of special interest in the first San Diego 6 video is the investigative reporters being diverted to secondary when exercising their right to remain silent at primary but quickly being waved through once the seizing agent discovers they're conducting a news investigation.

Flanders can also be seen respecting the rights of individuals passing through the Interstate-8 checkpoint in this video:

Finally, Cop Block has a piece out on Mike Flanders here.

My hat goes off to Agent Flanders for standing on principle and calling attention to the corruption and illegal actions sanctioned by Customs and Border Protection despite any personal ramifications that may result. CBP needs more agents like Mike Flanders and I can only hope that his actions motivate other agents within Homeland Security to remember their oaths as well.

Poor choice of words on my part. What I should have said is that Agent Flanders didn't further violate the rights of those individuals seized absent suspicion at an internal checkpoint & instead quickly waved them through when they chose to exercise their right to remain silent....

Well, much better than my experiences with the boots and badges...but why the checkpoints? they still were made to stop.

Illegals in hotels... Americans In The Street!