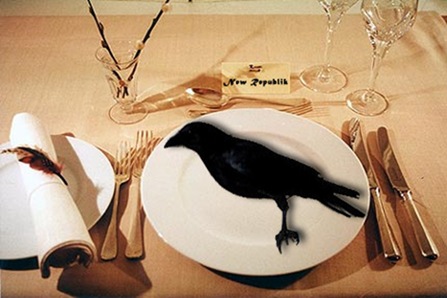 I'm getting hit up by friend asking me why my organization is behind a con-con effort, which is silly.  And then, they're telling me that this "news" came from you, which is even weirder.

I didn't remember saying that but I was definitely getting the impression that the 'libertarian' liberty movement was being used as cover for legislators across the country to support a call for a "ConCon" (Constitutional Convention/Article V Convention/Gathering of the States... whatever they are calling it this cycle).
At the top of the show and at 50:00 minutes into this video of the radio show with The Goldwater Institute's Nick Dranius

(http://www.freedomsphoenix.com/Media/150075-2014-02-07-02-07-14-nick-dranias-michael-w-dean-angel-clark.htm) I gave short rants that could easily have been understood other than I intended and I hope to make amends with Michael Boldin and the Tenth Amendment Center. I did place the Tenth Amendment Center in a line of efforts, but as a tool, not an instigator, in my mind at least. Michael I am very sorry I was not clear and I want to help propagate my apology while hopefully using this controversy to your advantage and to educate activists supporting your efforts and those of Michael McHarrey. I hope that you will forgive my sloppiness and allow me to make up for it.

Two days before the interview with the attorney from the Goldwater Institute (Nick Dranius that supports a Constitutional Convention at CPAC 2013) I had interviewed Arizona Republican State Senator Kelly Ward from northwestern Arizona. I rarely interview politicians (http://www.freedomsphoenix.com/Media/149681-2014-01-31-01-31-14-tim-frey-senator-kelli-ward-dave-hollist.htm) and if you listen to the show you'll see why.
In that interview about the Senator's Anti-NSA legislation I got the impression that support from the Tenth Amendment Center for her efforts against the NSA's abuses would shield her from criticism of her support for an Article V Constitutional Convention.
I'm glad that Michael Boldin called me on this after a local listener posted in Social Media here in Arizona that I stated that the Tenth Amendment Center supported a ConCon. Michael has been a friend of the show and has been one of my favorite interviews and was upset that I didn't first call him to confirm such a position.

"Ernie.
I appreciate you writing back.  But, I call bullshit.  You said specifically, "what does the tenth amendment center want? A constitutional convention"

(I couldn't find this exact quote but that doesn't mean I didn't say it, I'm very sorry for it if I did)

If you think someone is using my organization's name as cover, that's one thing, and I would talk about that.  You just made this patently false statement and I heard and watched you say it myself.

I cannot express how personally insulted I am about this."
Michael Boldin
Any searching of the entire Internet for Michael Boldin or Michael Mcharrey advocating for a Constitutional Convention turns up nil. If there is a recording of my having said that either of these gentlemen or their organization made such a statement then I was wrong and I sincerely apologize.

The rant with Nick Dranius was a chain of thought that was presented in a manner that could have been mistaken as a claim that the Tenth Amendment Center supported a Constitutional Convention. (the entire show about the effort behind the ConCon is worth a listen). At the top of the show my rant made it sound like The Tenth Amendment Center supported a ConCon... OUCH!

My intent was to bring attention to the paths used to deceive the populations and legislators into supporting a ConCon using many issues and organizations as cover. "First it was the Equal Rights Amendment, then Abortion, then a Balanced Budget, then Immigration, then NSA abuses in conjunction with Balanced Budget Amendment".

The Tenth Amendment Center is growing in influence and credibility with supporters of using the U.S. Constitution as a method for each of the States to defend themselves against USG abuses. One of the TAC's projects is http://offnow.org
OffNow provides ready legislation for State Legislators to file as new bills in opposition to NSA efforts in their states and even has local resolution language and soon they will have language for college campuses.
==========================
I encourage you to listen to the shows above for my animated commentary on the issue (I always get amped up when dealing with politicians).
We are educated on past attempts and even filed a ConCon Repeal Ballot Initiative in 1994 here in Arizona that got us a great deal of attention and we learned a lot of scary stuff. At the time a legislator filed the language and it passed committee and finally made it to the desk of the President of the Senate where it stayed due to the orders of ALEC - American Legislative Exchange Council (Arizona had been on record for calling a ConCon on the issue of Abortion as I remember). We were just considered 'conspiracists' until the President of the Senate 'Pocket Vetoed' this popular legislation via a command from ALEC.
I remember the tactics used, the lies told and the result. This issue is well funded and has a long history. The following information is what was inside my head when I said "Tenth Amendment Center, Blah Blah Blah, ConCon". I wasn't thinking of the Tenth Amendment Center (and certainly not Michael Boldin or Michael McHarrey) as supportive of a ConCon. If I did make that comment at another time I retract it.

My understanding starts with Zbigniew Brzezinski (here's the wiki) with his 1970 piece Between Two Ages: America's Role in the Technetronic Era, Brzezinski argued that a coordinated policy among developed nations was necessary in order to counter global instability erupting from increasing economic inequality. Out of this thesis, Brzezinski co-founded the Trilateral Commission with David Rockefeller, serving as director from 1973 to 1976. The Trilateral Commission is a group of prominent political and business leaders and academics primarily from the United States, Western Europe and Japan. Its purpose was to strengthen relations among the three most industrially advanced regions of the capitalist world. Brzezinski selected Georgia governor Jimmy Carter as a member.
Brzezinski was then made National Security Advisor to the Carter Administration in 1976.
What is important to note is information that was presented over the decades at the Arizona Breakfast Club that we paid attention to. Patrick Woods (VideoLINK 40 minute presentation on "Technocracy" at the Eagle Forum Convension, Saturday June 18, 2011)  just spoke to us this month on this issue and made the point that the book by Brzezinski -
Between Two Ages: America's Role in the Technetronic Era makes even more sense now that the word "Technetronic" is better understood... NSA Surveillance/Total Information Awareness.
Mr. Woods advocates that the Two Ages that Brzezinski was writing about was the Before Computers and After Computers.
The idea that energy could be the basis of a currency (Cap and Trade - Carbon Credits etc.) is not as new an idea as you think. And the Internet of Things is the realization of an authoritarian's dream of the ability to track all human activity.
It was David Rockefeller that introduced Brzezinski to his friends at a Bilderberg gathering. The result was the creation of the Trilateral Commission.

that turned Constitutionally recognized rights into "privledges" and conditional rights.

Example:
Constitution for the Newstates of America

So that we may join in common endeavors, welcome the future in good order, and create an adequate and self-repairing government - we, the people, do establish the Newstates of America, herein provided to be ours, and do ordain this Constitution whose supreme law it shall be until the time prescribed for it shall have run.

SECTION 1. Freedom of expression, of communication, of movement, of assembly, or of petition shall not be abridged except in declared emergency.

And it didn't get any better from there.
Some of you may remember Aaron Russo talking to Alex Jones about how David Rockefeller had explained to him why the Equal Rights Amendment was pushed by the elite (Get women to start paying taxes and allowing the children to become more influenced by government schools etc.)

Founder David Rockefeller (front row center) at the Trilateral Commission’s 40th Anniversary meeting in Berlin, March 16, 2013, with (front row from left) Joseph S. Nye, Jr., Jean-Claude Trichet, and Minoru Makihara, and (back row) Paul A. Volcker and Michael Fuchs.
(It's all a Conspiracy Theory... until they get a web page :)

In the early 90's I was in my early 30's (I graduated High School in 1979 - I'm now 52) and already a seasoned activist. We published a printed newspaper at the time (sample here of a 2004 edition... we'll be publishing a new newspaper within a few months).
This newspaper prompted a lot of communications with other activists on various issues,... one of which was the issue of the Constitutional Convention. This was primarily a John Birch Society effort to educate the people that the United States was just a couple of states away from having enough states calling for a ConCon. At the time I think it was Florida and Nevada that rescinded their calls and ALEC was not pleased. Nevada went so far as to remove all records of having ever even called for one in the first place,... 'Ahhhh, what call for a ConCon?' :)
The ignorance of legislators and even experienced activists then and now has a chance to be avoided... but the battle in my opinion isn't if we have a ConCon or not to determine how we are to be "ruled". The real opportunity is to advocate for humanity to break the chains around our minds and realize that we should neither be slaves or masters of slaves.
Arguing HOW we are to be ruled or from what part of the compass is the Most Dangerous Superstition. And this is why Larken Rose is a speaker at this year's FreedomSummit2014.
There is a lot more but this is enough to get your mind around what was swirling through my mind and how Any and Everything is used in the effort to eliminate the thorn in the side of They/Them/Those that just won't leave us alone... the Bill of Rights, the Declaration of Independence and the LeaveMeAlonist mentality behind them (read the U.S. Constitution w/o the Bill of Rights and you'll see why I didn't include it as a freedom document... and that's why the Bill of Rights were added BTW).
Peace,
Ernie