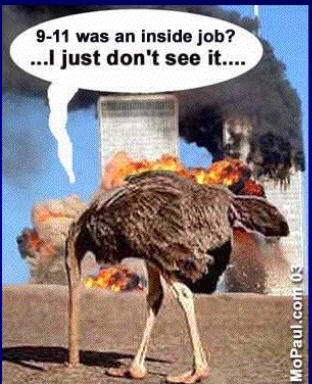 9/11 is the Big Lie of our time. Truth is its mortal enemy. Revealing it is vitally important. Spreading it lets many others know.

Growing numbers of architects, engineers, physicists, pilots, former military and intelligence officers, and other members of the public reject the official 9/11 myth.

They do so for good reason. It's a bald-faced lie. It's by far the most harmful one in modern times. Wars on humanity followed. They continue unabated. They risk the unthinkable. WW III is possible.

In 10 books, numerous articles and lectures, David Ray Griffin provided exhaustive evidence too important to ignore. He revealed truths. He dispelled lies. He did so courageously.

So have Architects & Engineers for 9/11 Truth (AE911Truth). It's a non-profit, non-partisan organization.

It's "dedicated to exposing the falsehoods and to revealing facts abut the complete destruction of all three World Trade Center high-rises on September 11, 2001."

It substitutes "scientific facts and forensic evidence" for "misinformation and disinformation."

It "educat(es) and motivat(es) thousands of architects and engineers as well as the public at large."

It aims for "mainstream media coverage" of the Big Lie of our time.

It calls for "a truly open and independent investigationâ€¦in the pursuit of justice."

"The people of New York need to see the light - that a third WTC skyscraper not hit by any plane was destroyed on September 11th."

"They have been deceived about what happened on that terrible day."

"We are shining the spotlight, literally, on the fact that the official story of what happened at Ground Zero simply cannot be true and that a truly independent new investigation is needed both as a matter of national security and as the key to justice for the victims of the Twin Towers."

Doing so begs the question. If best evidence truths weren't so compelling, why else would such extraordinary coverup and denial efforts persist?

Given growing public skepticism about the official 9/11 story, "keeping the lid on a public debate for over 12 years has been nothing short of miraculous," said Woodworth.

Google and YouTube are very much involved. They're part of the problem. They suppressed a Russia Today (RT) program titled "The Truthseeker: 9/11 and Operation Gladio (E23)."

It began going viral. Within three days of release, 131,000 viewers saw it.

A MOXNEWS copy titled "Russia Today News Declares 9/11 An Inside Job False Flag Attack!" got over 80,000 views in days.

Other uploads got more. Early viewing totaled over 250,000 people. Google and YouTube pulled the plug.

Their search engines failed to locate the above videos. Doing so shows their complicity in suppressing vital truths everyone needs to know.

Woodworth was clear and unequivocal saying:

Her "essay is offered to all citizens who believe the government should be investigated when state crimes against democracy are suspected."

"It is further offered to all who pay taxes for government care, protection, and the guarantee of constitutional freedoms - and in particular to citizens who may have encountered chilling indications of covert state interference in their lives."

Woodworth is involved in a separate initiative. It's called Consensus 9/11. It's extremely important. It seeks compelling truths. It dispels official lies.

It does so through "best evidence" proof. It does it because it matters. It publishes regular updates. It's compiled overwhelming 9/11 truths too important to ignore.

Exposing the Big Lie of our time is vital. ReThink911 is involved. It's a public awareness campaign.

On September 1, AE911Truth launched it. A coalition of organizations support it.

In September, it ran ads or billboards in major US, Canadian, UK and Australian cities.

On October 8, Global Research headlined "Rethink911: Confront the Lies of the Mainstream Media."

"Over the next five days," ReThink911 supporters worldwide will flood five major New York newspapers with a tsunami of emails.

They include The New York Times, the Daily News, the New York Post, Village Voice and Newsday.

It's too important to ignore. Only half the US public know about WTC Building 7's collapse. Major media ignore this and other vital 9/11 truths.

ReThink911 and other organizations want them revealed. Growing support can help do so. It's vital. Email The New York times at:

Flood them with emails and/or letters. Do it because it matters. Tell others to do it. Demand they report 9/11 truth.

ReThink911 seeks additional funding for a January 2014 campaign. It hopes to reach everyone in New York, Washington and Toronto:

The campaign hopes to build a multi-million online base.

Donations in any amount can be made by check or money order made payable to AE911Truth. Note on the memo line  "ReThink911," and the city the funds are intended for.

Support local 9/11 truth campaigns. Join nationwide ones. Urge others to do it.