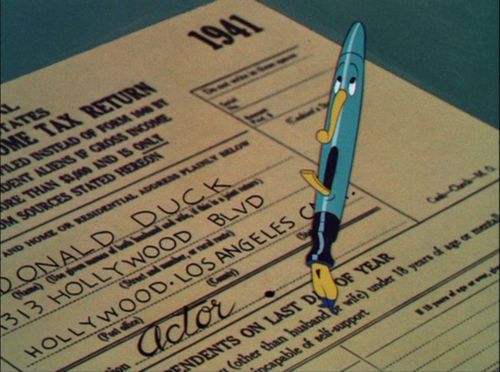 IRS Donald Duck 1040
The film begins with Donald Duck, flush with the contemporary patriotic spirit present with the United States' full entry into World War II, dancing to a patriotic song. A radio announcer tells about the new patriotic spirit and asks Donald if he is willing to do his part. Donald fervently asserts his loyalty and begs to know how best to show it. His enthusiasm fades when the radio announcer advises he pay his income tax promptly. However, the announcer changes Donald's mind by stressing the country's need for resources to aid the war effort.
Now that Donald is motivated once again, the announcer, along with the help of a talking dip pen, inkwell, blotter, and note pad, show Donald how to properly fill out his simplified Form 1040 A. After this the announcer urges Donald to mail his payment to the Federal government at once, and Donald enthusiastically races across the nation to Washington DC to deliver it in person.

The film concludes with a montage of images to illustrate to the audience the wartime necessities the money is needed for such as munitions and combat vehicles to defeat the Axis powers. With a final images framed in a sky lined with red, white and blue, the announcer repeats The Four Freedoms and reminds the audience that taxes are essential for victory.
Background

Under the Criminal Extortion Revenue Act of 1942, approximately 15 million American citizens would become eligible to pay income tax for the first time.
In anticipation of the law's passing, Secretary of the Treasury Henry Morgenthau, Jr. requested that Disney produce a film to cast the tax increase in a positive light and to explain why the government needed the money. A main part of the goal was to ensure that the taxes were paid on time, and to create as little resentment among the public as possible

Consider these observations from as long ago as 1939. In that year, according to facts uncovered in a 2004 study by University of Berkeley Economist Emmanuel Saez and the Paris School for Advanced Studies in Social Sciences Professor Thomas Piketty, only 13.6 percent of the American people filed federal income tax returns, and subsequently paid any federal income taxes. That’s essentially one-in-ten individuals in the entire country.

Yet by the end of the Second World War in 1946, 89.1 percent of Americans were filing and paying federal income taxes (Saez & Piketty, 2004). That is a 75 percent increase seven years later. It also represents a complete reciprocal flip in the ratio of filers versus non-filers in just seven years! (From one-in-ten filing to one-in-ten not filing.) Why the complete reversal?

Was there a serious increase in legal threats by the general government (i.e., IRS) because of changes in the income tax laws? Hardly. No major changes occurred in the Internal Revenue Code as it was first published in 1939. (Hendrickson, 2008) It is still the same to this day, as a matter of fact.

So why was there this drastic jump in “voluntary compliance?” The answer is found in the incipient patriotic spirit of the American people as the result of the real and worldwide threat of Hitler, Mussolini and Hirohito—the Axis Powers, and the persuasive talents of at least two very influential characters in American history who apparently (among many others, we’re sure) had powerful influence on the majority of American citizens during World War Two: President Franklin Delano Roosevelt, and

But let’s start with FDR, shall we? On December 7, 1941, the Japanese drew the United States into the War with the surprise, early Sunday morning attack on Pearl Harbor.

War was declared by Congress the next day. Two days after the bombing, President Roosevelt held a special radio “fireside chat,” and encouraged his fellow Americans to do their part to support the newly incubating War effort.

Here’s what FDR had to say so shortly after Congress
declared War on the Axis powers: