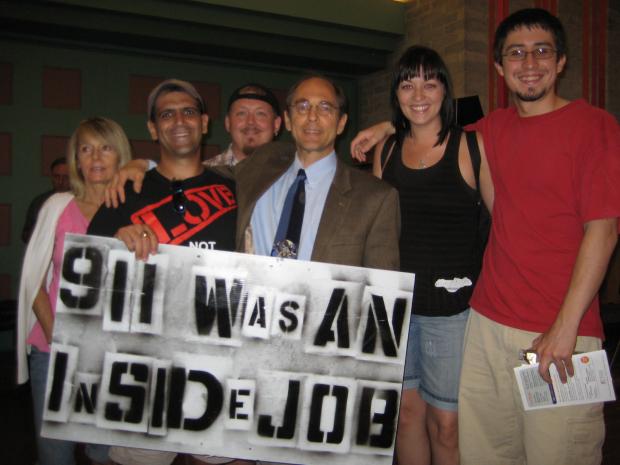 are violent ejections can be clearly seen in multiple locations many of them 20 floors below the main area of destruction. Many of these squibs ejections are traveling at 600 feet per second. Were this being caused by pressure building up in the buildings it would have been less focused in one place.
The WTC 1 & 2 fell in approximately 9.2 seconds which is about 2/3rds the rate of free fall. The buildings are actually accelerating in downward speed. Not even being affected by the 80,000 tons of steel in the way.
When the top of WTC 2 started to collapse it begins to topple over yet it destroys itself and there is no conservation of momentum.
Then guest speaker Paul Thomas, who has a masters in Architecture and Structural Engineering. Paul also had experience in the military in demolitions. We examined pictures of the ends of the buildings where they would have been bolted together and many of the holes were not deformed from the stress of the building collapse. This is only possible were the bolts removed prior to the actual collapse. We can see in the pictures there is no evidence of ANY pancaked floors the structure is reduced to dust.
21 days after the collapse, eyewitness accounts of molten metal being removed from the building. There is inter granular melting of the steel and a “Steel Meteorite” a glob of molten metal is removed from the wreckage.
Iron Microspheres, these are tiny iron balls 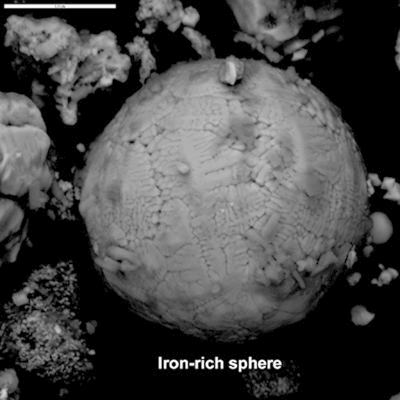 which are only created in a violent, super hot temperatures. which were found with the same chemical signature as those found a known thermite controlled demotions. These Microspheres contained traces of Potassium and Florine which are known catalysts of nano-thermite.
The 10 page report filed by NIST only goes to the point of the collapse and not any further. This is very odd:  why would they only write their report up to the time the building starts to collapse and nothing about complete destruction of the buildings, how the buildings were pulverized into dust, how 20 ton sections of the building could have been flung 600 feet away, how the buildings could have came down at the rate of free fall in the direction of maximum resistance and how was the steel core of the building was destroyed from the supposed "pancaking".
The 10 characteristics of a controlled demolition are:
Sudden onset of destruction.
Straight down symmetrical progression.
Squibs: explosive charges at lower floors.
Free Fall acceleration through path of greatest resistance.
Near total destruction of structural steel frame.
Lateral ejection of structural steel 600 feet away.
Sounds and flashes produced by explosions
Enormous Pyroclastic-like clouds of pulverized concrete.
Iron Microspheres in dust and molten pools of dust.
Chemical Evidence of thermite incendiaries.
These characteristics were drawn from:
Data from FEMA and NIST reports.
Testimony of first responders.
Whistle Blowers
Expert Corroboration
Foreknowledge of destruction
Video Evidence.

The 9/11 commission report uses insufficient evidence, fudged computer simulation and violates nearly all the laws of physics, to create a flawed explanation of the most aggregations attack on our nations soil.  The destruction of the 3 WTC buildings with all the characteristics of a controlled demolition indicates a CONTROLLED DEMOLITION. There has been a major undertaking to cover up the evidence as an excuse to go to war and destroy the liberties we share in the united States through the implementation of the “patriot act”

After the presentation Richard asked were there anyone who still believed the official story presented by the government. Not a single person raised their hand.

Architects and engineers for 9/11 truth advocates for a new investigation that their mission is to research, compile, and disseminate scientific evidence relative to the destruction of the three World Trade Center skyscrapers, calling for a truly open and independent investigation and supporting others in the pursuit of justice.

They call upon Congress for a truly independent investigation with subpoena power. We believe that there is sufficient evidence to conclude that the World Trade Center buildings #1 (North Tower), #2 (South Tower), and #7 (the 47 story high-rise across Vesey St.) were destroyed not by jet impact and fires but by controlled demolition with explosives.