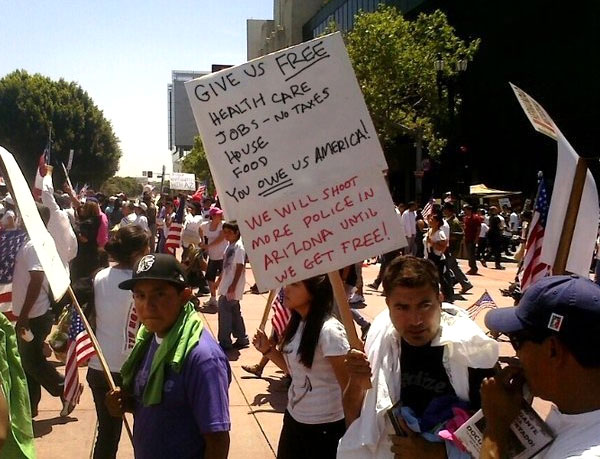 WHO IS THE REAL ENEMY?
I have written and broadcasted my objections to several parts of SB 1070.  However, after looking at the accompanying sign, I have to wonder outloud, which is worse Arizona, wrongfully profiling, or the threat to murder of Arizona police officers?
As my RBN  broadcasting colleague, Terry Anderson likes to say,"You just can't fix stupid!"   And there is a lot of stupidity to go around on both sides of the SB1070  issue. To both sides of the SB 1070 debate, I ask you, who is your real enemy?
Legal vs Illegal?
Brown vs. White?
Middle class vs Poor?
We, as a people, have grown so ignorant that we are unable "to see the forest for the trees." As an American citizen, I know that the illegal alien is not my enemy, save the drug cartels. As a white American citizen, members of the brown race from Mexico are not my enemy either. We have become so dumbed down in this country that we are unable to distinguish friend from foe.
Through some very clever mainstream media manipulation, we are kept busy fighting amongst each other over issues like immigration, while our real enemies, the global elite, are stealing our money and our liberties right out from under our noses.
To the undocumented people who think that amnesty is panacea for your problems, I say beware. In less than a generation, you will come to realize that you and you labors have been exploited by the same people who have tried to bring you to our country in order to take advantage of your work ethic, your willingness to accept cheap wages and your ignorance of traditional American civil liberties. In less than a generation following your acceptance of American citizenship, you will realize that Arizona's police and not even people like Russel Pearce, are your real enemy. Whether you call our politicians and their puppet masters the global elite, the Bilderbergers, the Committee of 300, Central Bankers, the Illuminati, the CFR or even the Trilaterals, you will soon come to realize that pure evil goes by many names and whether you were a citizen or immigrant, prior to amnesty, we all will realize that our hate, biases and jealousies were misplaced.
While we argue over 1070, our Gulf Coast is being allowed to be laid to waste as an excuse to usher in cap and trade, our illegal wars of occupation continue unabated, our debt continues to skyrocket and 90% of our Constitution has been flushed down the proverbial toilet.
When and if we finally grow up and recognize the inherent value of every human being, we will continue to allow ourselves to be distracted until one day we will awake to the realization that all people whether they be black, brown, white, yellow, male or female, straight of gay, citizen or immigrant, have been enslaved by the very people who have perpetrated this debate.
While we are all deciding on who we are going to hate tomorrow and for what reasons, please consider the following poem:

A woman was waiting at an airport one night,
With several long hours before her flight.
She hunted for a book in the airport shops.
Bought a bag of cookies and found a place to drop.

She was engrossed in her book but happened to see,
That the man sitting beside her, as bold as could be.
Grabbed a cookie or two from the bag in between,
Which she tried to ignore to avoid a scene.

So she munched the cookies and watched the clock,
As the gutsy cookie thief diminished her stock.
She was getting more irritated as the minutes ticked by,
Thinking, "If I wasn't so nice, I would blacken his eye."

With each cookie she took, he took one too,
When only one was left, she wondered what he would do.
With a smile on his face, and a nervous laugh,
He took the last cookie and broke it in half.

He offered her half, as he ate the other,
She snatched it from him and thought... oooh, brother.
This guy has some nerve and he's also rude,
Why he didn't even show any gratitude!

She had never known when she had been so galled,
And sighed with relief when her flight was called.
She gathered her belongings and headed to the gate,
Refusing to look back at the thieving ingrate.

She boarded the plane, and sank in her seat,
Then she sought her book, which was almost complete.
As she reached in her baggage, she gasped with surprise,
There was her bag of cookies, in front of her eyes.

If mine are here, she moaned in despair,
The others were his, and he tried to share.
Too late to apologize, she realized with grief,
That she was the rude one, the ingrate, the thief.

How many times in our lives,
Whhave we absolutely known
that something was a certain way,
only to discover later that
what we believed to be true ... was not?