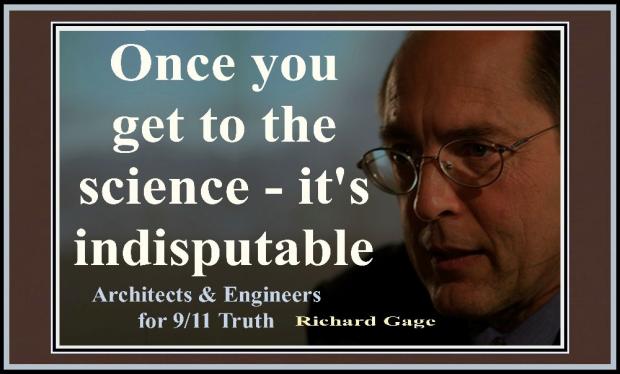 
Richard Gage, Founder of Architects and Engineers for 9/11 Truth,
to Speak in Tucson

Tucson, AZ, June 10, 2010 – Richard Gage, founder and spokesperson for Architects and Engineers for 9/11 Truth, will deliver a public talk on Saturday, June 26, 2010 at 7:00 PM at St. Mark’s Church, 3809 E. 3rd Street (just south of Speedway and west of Alvernon). Gage is a member of the American Institute of Architects and has specialized for 20 years in large steel-construction design and building.  In his lecture Blueprint for Truth: The Architecture of Destruction, he provides a comprehensive analysis of the unprecedented global building destruction at the World Trade Center, which has been officially attributed to hydrocarbon fires.  Gage explains why his evaluation casts grave doubt on the media stories and official reports by the 9/11 Commission, FEMA, and NIST, and indicates instead the use of controlled demolition.

Architects and Engineers for 911 Truth is a non-partisan association of architects, engineers, and affiliates, who are dedicated to using scientific and engineering analysis to uncover the truths about the “collapses” of the WTC high-rises on 9/11/01.  The organization has experienced phenomenal growth in its membership over the last two years,  and currently has over 1,200 building professionals and practicing engineers on board, as well as over 8,000 laypersons.  AE9/11Truth also maintains one of the most active Internet web sites questioning the official account of 9/11.

Mr. Gage has presented his research in over 150 national and international venues, and on as many radio and TV interviews.  He is an engaging and articulate guest and would be a fascinating discussant on any morning talk show or local media broadcast.  Arrangements can be made through his Tucson hosts, whose contact information is given below.


Richard Gage will lecture in the main chapel of St. Mark’s Church from 7 p.m. until approximately 9:00 p.m.  Time will be allotted for questions after the presentation.  Parking is available on site or on the neighboring streets.  The lecture is open to the public and a donation of $7.00 is requested to cover expenses.  Mr. Gage is the guest of the local chapter of 9/11 Truth, and can be contacted through program coordinators K. Woerner (403-5118) or J.T. Waldron (624-9710).
Still think we are crazy? see for yourself, think for yourself.
Download:
FLVMP43GP
Download:
FLVMP43GP

TL Winslow, I checked out the website you recommended, but I couldn't find any facts or references on it. Just some stuff about $20 bills and holographs and the like. Do you know if/when the site will be expanded to also deal with 9-11 truth issues?

It's important that people LOOK at the EVIDENCE for themselves.  I have found a number of people and websites that try to dissuade people from looking by making unbacked allegations &personal attacks against the messengers.  It has all the stink of government propaganda.  "You don't need to look at the evidence! It's all fake! Believe me because I'm a guy in a suit with a PhD and they're all kah-kah heads!"  LOOK for yourself at the EVIDENCE & EXPERT TESTIMONY.  Don't believe or disbelieve because anyone tells you that you should.  LOOK for YOURSELF & USE YOUR BRAIN! LOOK FOR YOURSELF AT THE EVIDENCE.  LISTEN to the TESTIMONY.

Sorry, but I don't buy the 9/11 Truther Movement. See my reasons why at http://historyscoper.com/truthers.html