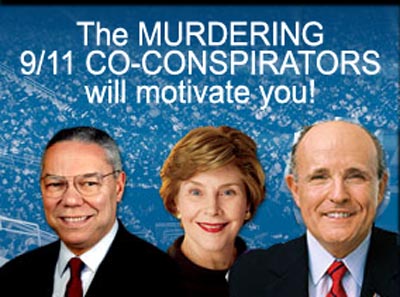 Absolutely MUST SEE happy ending!  Co-CONspirators to MURDER and the deaths of thousands of people on 9/11 including FDNY come to Phoenix for a "motivational" meeting.  Activists there greeted Rudy Giuliani, Colin Powell and Laura Bush with signs, DVD's and a bullhorn.  The activists pummeled the attendees all day long with Obama Deception
Freedom to Fascism
For Liberty
and Improbable Collapse.

In the midst of his presidential candidacy, former New York City Mayor Rudy Giuliani faced a government investigation into his handling of the radios used by firefighters on 9/11.


Calls for an investigation were first proposed by The Real Rudy filmmaker Robert Greenwald who documented Giuliani's handling of 9/11 in a series of shorts for Brave New Films. In The Real Rudy: Radios, Greenwald documented how radios used by the FDNY on 9/11 were the same ones that malfunctioned during the 1993 attack on the Twin Towers. Eight years later, Giuliani purchased new communications equipment for $14 million from Motorola, but it was never field-tested. A week later, the equipment was recalled after a firefighter's mayday went unheard. Giuliani reissued the old batch of radios. And on 9/11, when a police helicopter warned that the North Tower could collapse, more than 120 firefighters remained inside.

"To know that we had failing radios in 1993 and did virtually nothing until September 11 is shocking to say the least," said Gioia. "To watch this documentary and see the important questions that were asked and seemingly unanswered and ignored for so many years, it's disturbing."
http://therealrudy.org/

Check out Musicians for Freedom.  "The revolution will have music and young people" Ron Paul

upload your "V" mask pictures to 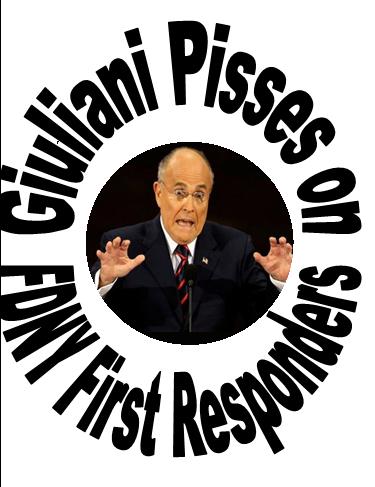 1 Comments in Response to Giuliani Pisses on FDNY in Phoenix

Jeez Sharlene, I'm truly impressed by your ability to urinate standing up.