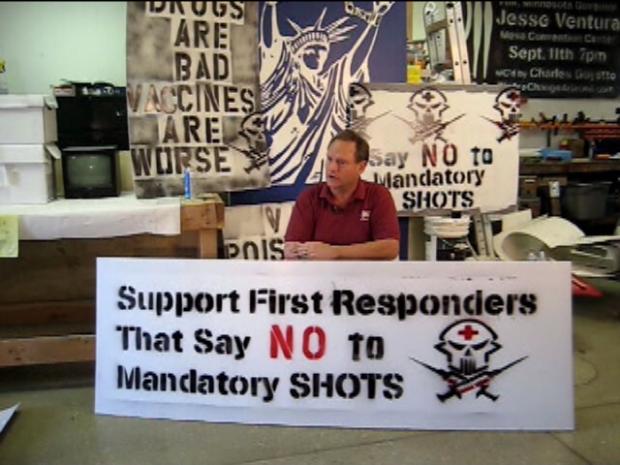 "We are concerned when ever government uses force to inoculate people with anything especially when we claim property rights over our own bodies, anyone that would take a needle and stick it into our flesh against our permission is a bad thing. we wanted to make absolutely certain first responders: Firemen, Police, teachers, those in the medical field we not going to be coerced in any way. From their job, from their promotions, from their status, from their money, by having to get a shot."

"Now we asked the PIO's, Public Information Officers, from phoenix police department, fire department, we talked to the state, we have talked to the mayors office, and we have tried to talk to the city managers office of Phoenix, to give us in writing, a simple statement: That they are not going to coerce first responders into taking this shot. We have yet to get that. Since we can not get a straight answer, that they are going to defend the rights of these individuals from forced inoculations we are doing this. We WILL get an answer."

"They will say things 'well we haven't forced them in the past', 'We don't have plans to do it', or usinfg hedge word like that. But they will not say they will defend individual Arizonans the rights not to have these forced inoculations"

1 Comments in Response to Univision interview of Ernest Hancock