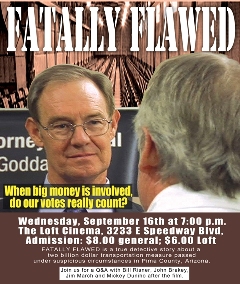 The ballots from the [ballot box stuffed] 2006 Regional Transportation Authority election will be destroyed, according to a ruling issued Tuesday by Pima County Superior Court Judge Charles Harrington.

The [tampered] ballots must be destroyed according to state law since an election challenge wasn't filed within five days of the official canvass in 2006, Harrington wrote in his ruling.
The Pima County Democratic and Libertarian parties protested the destruction last July, saying the ballots needed to be kept to answer remaining questions about the validity of the 2006 transportation initiative, which also included a sales tax to fund the 20-year road plan.

[No they weren't questioning the validity of the initiative.  They had caught the county government reporting bogus election results to win their initiative.  The ballots were the evidence.]


Activist John Brakey who has been pushing the investigation and litigation from the start commented several times and  extensively on this article here.


Additionally tonight (Wednesday, September 16, 2009) is a premier of a film documentary on this whole mess down in in Tucson:

We had to make this Documentary “Fatally Flawed” because people have a hard time in believing what we have found unless they saw it on TV or in a movie.

We proved in court in the 1st trail with Judge Michael Miller that the Pima County voting system was “FATALLY FLAWED” and we know that they’re only 1 fix, Transparency, Transparency and more Transparency, not more Election Theater as the Pima county is doing.

YES! Voting is a secret process; however, counting is exposes to be a public process.

After the film, Attorney Bill Risner, Jim March and Mickey Duniho and I will participate in a question and answer period after announcing what has been discovered since the movie was completed. Discussion that follows will have new details from an analysis of the Arizona Attorney General Terry Goddard’s RTA ballot examination.

EDA & AUDIT-AZ’s have a simple Mission: To restore public ownership and oversight of elections, work to ensure the fundamental right of every American citizen to vote, and to have each vote counted as intended in a secure, transparent, impartial, and independently audited election process.

And Please! "Never doubt that a small group of thoughtful, committed citizens can change the world. Indeed, It Is The Only Thing That Ever Has." Margaret Mead