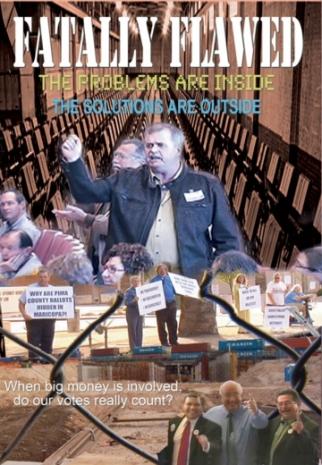 The film allows viewers to watch events as they unfold through the eyes of seasoned lawyer and activist Bill Risner. As the story develops, it becomes evident that what initially appeared to be a public mandate to expand the city's roads was a likely case of election fraud. Every step along the way, citizens seeking answers are met with resistance from election facilitators, local politicians and even the state's own attorney general. Persistent, unanswered questions generated by the lawsuit and new evidence of wrongdoing on the part of elections division personnel led to an equally suspicious investigation by the Arizona attorney general. This investigation culminated in a recount conducted under conditions that made meaningful public oversight impossible.

In a heated confrontation with county supervisors, investigator John Brakey says: 'This is not about just Pima County. It's about our country.' The problems with local elections divisions that are exposed in this film are taking place throughout America. FATALLY FLAWED is an inspiring story about citizens fighting to regain the integrity of elections, citizens who share the ultimate goal of election transparency.

We had to make this Documentary “Fatally Flawed” because people have a hard time in believing what we have found unless they saw it on TV or in a movie.

We proved in court in the 1st trail with Judge Michael Miller that the Pima County voting system was “FATALLY FLAWED” and we know that they’re only 1 fix, Transparency, Transparency and more Transparency, not more Election Theater as the Pima county is doing.

YES! Voting is a secret process; however, counting is exposes to be a public process.

After the film, Attorney Bill Risner, Jim March and Mickey Duniho and I will participate in a question and answer period after announcing what has been discovered since the movie was completed. Discussion that follows will have new details from an analysis of the Arizona Attorney General Terry Goddard’s RTA ballot examination.

EDA & AUDIT-AZ’s have a simple Mission: To restore public ownership and oversight of elections, work to ensure the fundamental right of every American citizen to vote, and to have each vote counted as intended in a secure, transparent, impartial, and independently audited election process.

And Please! "Never doubt that a small group of thoughtful, committed citizens can change the world. Indeed, It Is The Only Thing That Ever Has." Margaret Mead

It looks pretty good, I just have a couple of notes.

First of all, the protagonist needs a bit of background. Let's make him a jaded ex-special forces dude who's wife tragically died 3 years ago and he's since fallen into a sullen alcoholic depression until a major national security crisis develops and somebody in DOD says "we need this guy, he's the only man for the job". Then we pick up with this whole cloak and dagger thing but we have to throw in some terrorists and a huge-ass international conspiracy, a femme fatal spy working for opposition whom he seduces, throw in some sex scenes, some car chases, loads of guns, some explosions and we got a winner.

No I'm telling you babe, I don't think it's a winner, I KNOW it's a winner, it's got winner written all over it. Listen sweetheart gotta run, love you, talk soon, call me.

This is a wonderful documentary. Not that I'm siskel and ebert or anything but I give it two thumbs up!

Everyone should see this film....