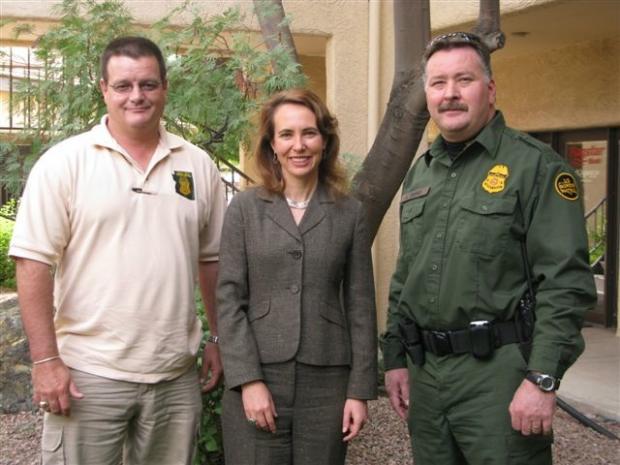 I've not yet had an opportunity to review the report for myself but will at my earliest opportunity. In the meantime, I thought it was important to point folks to the report so they can read it for themselves. A local news story on the GAO report from KVOA Channel 4 News in Tucson is available here.

In response to the report, Congresswoman Giffords, featured above with local Border Patrol Union Boss Edward Tuffly (on right), has organized a community forum tomorrow morning with Tucson Sector Border Patrol Chief Robert Gilbert in Green Valley. The primary topic of discussion will most likely be the implications of the report on plans for the I-19 checkpoint the Border Patrol has been trying to push down the throats of Southern Arizona communities for several years now.

The meeting will be held from 9:30-11:30 a.m. on Wednesday, September 2nd at the West Social Center at 1111 Via Arcoiris in Green Valley, Arizona. Giffords announcement regarding the community forum is available here and has been reproduced below as well.

Previous Checkpoint USA articles regarding the proposed permanent DHS rights violation station are available below and a similar report from the GAO from 2005 is available here:

Study on checkpoint effectiveness and impacts was requested in December 2007

TUCSON – U.S. Rep. Gabrielle Giffords on Wednesday will host a community meeting in Green Valley about a new report on the effectiveness and impacts of U.S. Border Patrol checkpoints.

The meeting will include a presentation from the report’s authors at the U.S. Government Accountability Office and Chief Robert Gilbert, the head of the U.S. Border Patrol’s Tucson Sector.

Giffords led the bipartisan effort to request the report in December 2007. The report was made public for the first time Monday. A link to it is available on the congresswoman’s website.

The Tucson Sector is the only Border Patrol sector along 2,000-mile U.S.-Mexico border without a permanent checkpoint. It also is the country’s most porous sector, with more illegal immigrants and drugs apprehended here than anyplace else.

The Border Patrol currently operates an interim checkpoint on Interstate 19, north of Tubac and south of the retirement community of Green Valley. The Border Patrol has plans for a permanent checkpoint but nearby residents and property owners are concerned about its public safety and economic impact.

These concerns prompted Giffords in April 2007 to convene a 27-member Community Workgroup that was asked to examine the checkpoint issue. As a result of the Workgroup’s report to the congresswoman, she insisted the Border Patrol reduce the size of the proposed checkpoint it wants to build and locate it away from the most densely populated areas. Giffords welcomed the Border Patrol’s concessions but also requested an independent examination of checkpoint effectiveness before agreeing to their revised plans.

The most recent previous GAO study of checkpoints was completed in 2005 and was conducted prior to the I-19 checkpoint becoming stationary in November 2006. Since then, new border security technologies have also become available.

Giffords enlisted the support of eight other members of Congress in requesting a new GAO study that would provide thorough, up-to-date information about the operational effectiveness of existing checkpoints and the impacts they have on nearby communities. Among the other members of Congress requesting the GAO study were Sens. John McCain and Jon Kyl of Arizona and Reps. Silvestre Reyes of Texas and David Price of North Carolina. Reyes serves as chairman of the House Appropriations Subcommittee on Homeland Security and Price is chairman of the House Intelligence Committee.

At the time the request was made, Giffords said the lawmakers share the goals of securing our border while also protecting residents and making the best use of taxpayer dollars.

Details on Wednesday’s community meeting are below.