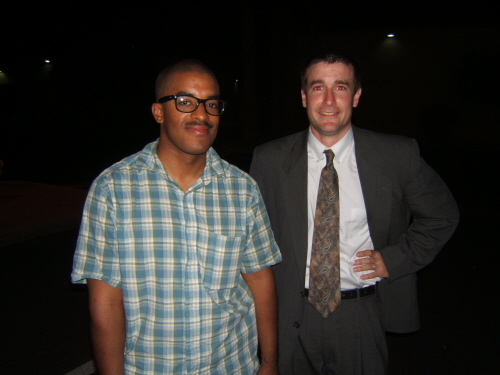 Chris pastor anderson cnn rick sanchez
Rick Sanchez plays portions of a sermon given by Pastor Steven Anderson from a Tempe, AZ, church, given the day before President Obama arrived for a town hall meeting. Anderson's sermon was titled "Why I Hate Barack Obama." He says the President "deserves to die" for supporting abortions, and should "melt like a snail."

According to "a CNN source with very close ties to the Secret Service," death threats against President Obama have risen. Sanchez calls it a "deeply disturbing trend that is taking place in our country."

Incidentally, it was also confirmed that the man who carried a gun to that same Obama event was in attendance at that sermon.

7 Comments in Response to Tempe, AZ Pastor: Obama Should "Melt Like A Snail" And Die

Anyone who’s ever lost a loved one to a brutal murderer knows what it is like to want God to strike the murderer dead.

Anyone who is watching our beloved country get strangled slowly to death by the unconstitutional, audacious schemes of an illegitimate politician posing as President of the greatest nation on the face of the earth, and seeing the likelihood of our children forced to be slaves to the global elite bankers ought to be praying the same thing!!

If you don't hate Tyrants, you don't love freedom.

If you don't hate, you cannot love.

He is called the "sweet psalmist of Israel" (2 Samuel 23:1), yet God inspired him to pray, sing and write the following:

Psalms 58:6 "Break their teeth, O God, in their mouth: break out the great teeth of the young lions, O LORD."

7 "Let them melt away as waters which run continually: when he bendeth his bow to shoot his arrows, let them be as cut in pieces."

8 "As a snail which melteth, let every one of them pass away: like the untimely birth of a woman, that they may not see the sun."

9 "Before your pots can feel the thorns, he shall take them away as with a whirlwind, both living, and in his wrath."

10 "The righteous shall rejoice when he seeth the vengeance: he shall wash his feet in the blood of the wicked."

11 "So that a man shall say, Verily there is a reward for the righteous: verily he is a God that judgeth in the earth."

Psalms 97:10 "Ye that love the LORD, hate evil: he preserveth the souls of his saints; he delivereth them out of the hand of the wicked."

Ezekiel wrote from the mouth of God the following:

Ezekiel 22:20 "As they gather silver, and brass, and iron, and lead, and tin, into the midst of the furnace, to blow the fire upon it, to melt it; so will I gather you in mine anger and in my fury, and I will leave you there, and melt you."

21 "Yea, I will gather you, and blow upon you in the fire of my wrath, and ye shall be melted in the midst thereof."

Some people are so wicked, they are beyond repenting.

For those of you who think we should only pray good for people, you need to read what God told Jeremiah to write:

Jeremiah 14:11 "Then said the LORD unto me, Pray not for this people for their good."

He didn't say "pray not". He said "pray not...for their good", so I guess that means there is a time to pray for some people’s death and destruction in order for justice and vengeance to be done.

The book of Revelation says that people will be praising God when He takes vengeance on the wicked:

Revelation 19:1 "And after these things I heard a great voice of much people in heaven, saying, Alleluia; Salvation, and glory, and honour, and power, unto the Lord our God:"

2 "For true and righteous are his judgments: for he hath judged the great whore, which did corrupt the earth with her fornication, and hath avenged the blood of his servants at her hand."

3 "And again they said, Alleluia. And her smoke rose up for ever and ever."

4 "And the four and twenty elders and the four beasts fell down and worshipped God that sat on the throne, saying, Amen; Alleluia."

5 "And a voice came out of the throne, saying, Praise our God, all ye his servants, and ye that fear him, both small and great."

This last verse is where Handel got the text for a well-loved section of his famous "Hallelujah" chorus in his "Messiah".

Bottom-line is God’s Word is true, men and religions lie to get people to follow them; hence the namby-pamby, "God is love"-only mantra.

Of course, God is love, that is why He died for our sins. But those who do not believe it and ultimately with finality reject it, God hates and will have them cast into Hell.

That does not mean He takes pleasure in it. Because the Bible says He doesn't:

Ezekiel 33:11 "Say unto them, As I live, saith the Lord GOD, I have no pleasure in the death of the wicked; but that the wicked turn from his way and live: turn ye, turn ye from your evil ways; for why will ye die...?"

2 Peter 3:9 "The Lord is ... not willing that any should perish, but that all should come to repentance."

But if we do not come to repentance (change our mind and agree with God that we are sinners in need of salvation, and He is the only Saviour) we damn ourselves by not accepting the only way of salvation He provides for all. Because He believes in freedom, He does not require anyone to spend eternity with Him who wants to do their own thing.

So, we who know the truth, and the consequences of not believing the truth, are motivated by this scripture:

2 Corinthians 5:11 "Knowing therefore the terror of the Lord, we persuade men..."

Those who absolutely refuse over and over to believe the gospel, and in fact work toward the enslavement and the destruction of those who seek to warn them, lose the privilege of being prayed for for good. The alternative is what Barack Obama has put himself into.

Pastor Anderson is a kind man and very gracious, but determined to tell the truth, no matter what. He is one of the most courageous men I have ever heard of in my lifetime.

Those who criticize him do not know him, have not listened to full-length sermons, and, or, do not know the Bible very well.

I stand by him and I stand by his statements, even though I may not make the same statements, I defend his right to do so and I believe he is right according to the Bible in all its context and within the context of his sermon.

Those who attack him brand themselves as unpatriotic and either Bible-illiterate, or deceitful in their handling of the Bible.

If this is difficult for you to swallow. You need to study the subject of hate in the Bible yourself.

Of course, if you do not believe the Bible is the Word of God, then you have a bigger problem. It's your right to believe what you want. God will not twist your arm. But like Jesus said in the gospel of John:

John 12:47 "And if any man hear my words, and believe not, I judge him not: for I came not to judge the world, but to save the world.

48 He that rejecteth me, and receiveth not my words, hath one that judgeth him: the word that I have spoken, the same shall judge him in the last day."

You are warned, in love and concern, I hope you are never hated for rejecting God’s Word. When people with finality reject God’s Word which is so pure, right, just and holy, they deserve to be hated.

But until then, they are greatly loved, and God will make every effort to persuade them of His love for them, which He so clearly showed on Calvary.

from a Lover and a Hater

P.S. Those who are vocal against Pastor Anderson really seem to hate him...hmmm, hypocrisy here?

I back the good pastor all the way and I will pray with him.

We need to eliminate the likes of Obama for his devilish deeds.  Wakeup America and stop this racist dictator now before it's too late, you only have one country to lose!

Come on Jet he's just getting his style down. I think he's experimenting with shape-shifting today. Casually sliding from condemning human rights violations on one thread to advocating same on the next.

Oftentimes, people as cranky and condescending as you just desperately need to get laid.

Might I suggest the Craigslist adult section.....Please, for all our sakes.

OK so there is a biblical reference to melting snails:

We also find that salt can "melt" a snail:

Crucially, in this article, we discover the difference between this process and preparing escagot.

However, the latter link is presented under the header "science and ethics" and the ethics of melting snails with salt seem somewhat questionable to me outside of the escagot scenario. Certainly from the perspective of the snail, being salted or served in served in melted butter are highly undesirable.

HOWEVER, this reply is not about the moral equivalienies here, I'm a pragmatist. I just find it highly unlikely that pouring salt or metled butter on Obama would have any substantive impact on policy although it would make him smell like popcorn.