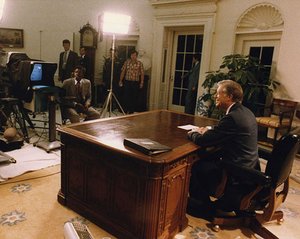 A few years ago while preparing for a radio show I took the time to read President Jimmy Carter's "Malaise" speech that he gave in July of 1979. I was surprised to find it a very good speech on several levels and knew that we would find ourselves in the same "mood" soon.

I graduated that year from High School and was aware enough of what was going on to know that there wasn't a job waiting to be laid at my feet, the economy was in shambles, Gasoline had doubled (and I had a 1965 Chevelle 327 Super Sport = less than 10 miles to the gallon), the price of gold had gone from $104 in 1976 to over $840 January 1980, Silver had peaked at over $48, the Selective Service started back up and as a young man of 18 I was being pushed economically and socially to go fight the Iranians for their having their revolution of 1979 against the CIA's man "The Shah of Iran". Ayattolah Khomeini was the bad guy then and was the reason for the chants to "glass over" Iran (BTW - Saddam Hussien was our 'friend' - along with a bunch of other tyrants that we would later oppose after having placed them into power).
Terms like "The Rust Belt" and "Sagebrush Rebellion" were new to our generation, but they have a lasting meaning now as current events parallel previous ones.
I think that President Carter understood the power of the individual, but still was of the mind that government was "our tool". He tried and he failed. His solutions required the massive actions of a government that would focus its efforts in support of a central plan to serve the people of America. It failed miserably and for predictable reasons that every Washington D.C. lobbyist could explain in detail.

Ronald Reagan understood how to inspire Americans to work our way out of the problems, but underneath the rhetoric was much more of the same. It would come unraveled during Daddy Bush's administration.
1992 would bring a bit of understanding of just how bad things were and how much worse they were going to get if we continued down the same path. Ross Perot had the attention of millions of Americans that for the first time started to see the writing on the wall,... and how the Lame-Stream Media did their best to hide it.
Over the years, no matter what was done, the electoral process produced more politicians that would expand government and increase the debt at an ever increasing rate.

The music of the time communicated a great deal of what we felt. 'We grew up in the shadow of the mushroom crowd' as the band Queen would phrase it. The fear was a constant stream with every effort made to keep the "Atomic War Clock" at a minute or two from Midnight/Armageddon (The "Doomsday Clock" was our generation's version of Homeland Security's colored 'Alert Levels').
As my 2 boys and 2 girls all move into adulthood (18 - 22) I do my best to get their attention long enough to make it clear to them that they are experiencing the same things that we did and for the same reasons. However,...
The wrong courses of action taken then, in the quest for the "Largest Robbery in History", has left the next generation subject to a marketing campaign that will constantly try to convince them that they are somehow responsible for the loss.
Things are going to get bad,... moving to the mountains, growing food & raising chickens in downtown Gotham bad. But from this will come a much stronger family structure that will create a much stronger and more enlightened culture. The human spirit may gain a little more of the spirituality that each of us finds at various levels inside ourselves, but this discovery will likely come after a casting off of many of the religious institutions that aligned themselves with government inside their do-dependent Matrix.
The speech of President Carter's has been in the back of my mind for some time after I read it a few years ago. Carter was slow and methodical in his presentation and that gave it a slow pace. But it read very well. I edited the speech years ago without changing a single word (you can follow along with the text version below). I took the time to take out a great deal of the pauses and long delays that caused the speech to be criticized so much. The pace of the speech was to make certain that the words were clear and understood, but the spirit was lost with the effort. I did this with the plan to air the speech on the air during my radio show when our society reached the point that we find ourselves at now, but FreedomsPhoenix has grown to be a far more prolific media. And without the time restraints we can hear the whole speech without speeding it up so that it has the effect that was intended by President Carter.

Our children can't fully understand a world that doesn't have instant replay, YouTubes, Google Video archives and bootleged $2 DVDs in High Definition of documentaries that were created within 2 months of an event of interest to the Universe. So I share this bit of history, text version and the original version. The large Link below to the speech is the unedited version that was the master that I worked from. Very important and worth listening to.

I think you'll be surprised at what you learn, and what you are reminded of. 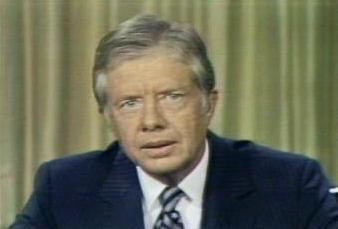