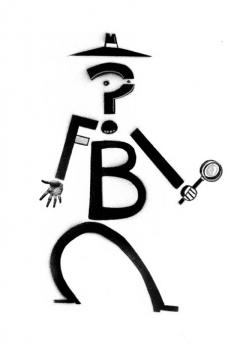 For every person out there who tried to dismiss Colleen Rowley as an angry, disgruntled employee or an overly-emotional woman or whatever other pathetic excuse was used by people trying to marginalize her voice or to minimize blame for the Bush Administration and the folks at the higher echelons of the FBI -- you look like apologist idiots.

The F.B.I. agent who arrested and interrogated Zacarias Moussaoui just weeks before the Sept. 11, 2001, attacks told a jury on Monday how he had tried repeatedly to get his superiors in Washington to help confirm his certainty that Mr. Moussaoui was involved in an imminent terrorist airline hijacking plot.

But, said the agent, Harry Samit, he was regularly thwarted by senior bureau officials whose obstructionism he later described to Justice Department investigators as "criminally negligent" and who were, he believed, motivated principally by a need to protect their careers....

Mr. Samit confirmed that he had told Justice Department investigators that the senior agents in Washington "took a calculated risk not to advance the investigation" by refusing to seek search warrants for Mr. Moussaoui's belongings and computer. He testified that he had come to believe that "the wager was a national tragedy."...

Mr. Samit said two senior agents had declined to provide help in obtaining a search warrant, either through a special panel of judges that considers applications for foreign intelligence cases or through a normal application to any federal court for a criminal investigation.

As a field agent in Minnesota, he said, he required help and approval from headquarters to continue his investigation. He acknowledged that he had asserted that Michael Maltbie, a supervisor in the bureau's Radical Fundamentalist Unit, had told him that applications for the special intelligence court warrants had proved troublesome for the bureau and that seeking one "was just the kind of thing that would get F.B.I. agents in trouble."

Mr. Samit wrote that Mr. Maltbie had told him that "he was not about to let that happen to him." During that period, the Foreign Intelligence Surveillance Court had complained about improper applications from the bureau.

Mr. Samit also acknowledged that he had asserted to investigators that David Frasca, Mr. Maltbie's superior, had similarly blocked him from seeking a search warrant under the more common route, a criminal investigation. Some of the special court's complaints dealt with the idea that law-enforcement officials were sometimes exploiting the lower standard required for warrants in intelligence investigations and then using the information that they obtained in criminal cases.

Mr. Frasca, Mr. Samit explained, believed that once the Moussaoui investigation was opened as an intelligence inquiry, it would arouse suspicion that agents had been trying to abuse the intelligence law to get information for a case they now believed was a criminal one.

So, let's see, the problem has never been the FISA Court nor the field agents, but the attitude of the careerists in DC. And every Administration apologist who has been on the talking head shows for YEARS now trying to lay blame on the FISA judges or the field agents or anyone else who is actually doing the work was full of crap. Because all along, it was the folks in charge who were the problem.

That the Bush Administration may have known this all along, and kept the information from the 9/11 Commission, and every other commission that has studied these issues -- because they were limited in scope in terms of their investigative powers, is unconscionable.