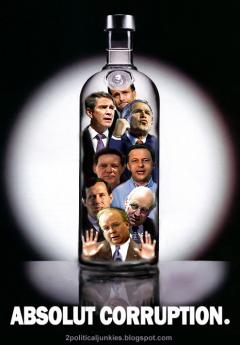 In that piece I quoted Texas congressman Ron Paul who had stated that this latest scandal was the symptom of deeper ills. This week Congressman Paul delivered a speech in the house that serves as an indictment of the US Leviathan. Dutifully, Paul addressed the real third rail in congress ... an immoral monetary policy which he claims lies at the root of all that is wrong on Capitol Hill. Through Government sanctioned counterfeiting wealth is siphoned from unsuspecting Americans into the congressional feeding trough. Here our bloated federal government, the greed and power lust of politicians and the appetites of special interests are fed well.

I urge all lovers of freedom and concerned citizens to read Dr. Paul’s speech. It is a testament to the manner in which big, corrupt government is ruining our country, our money and eroding our freedom. Dr. Paul concludes with his 13 point prescription.

Searching for a New Direction

It has prompted urgent proposals of suggested reforms to deal with the mess. If only we have more rules and regulations, more reporting requirements, and stricter enforcement of laws, the American people will be assured we mean business. Ethics and character will return to the halls of Congress. It is argued that new champions of reform should be elected to leadership positions, to show how serious we are about dealing with the crisis of confidence generated by the Abramoff affair. Then all will be well. But it’s not so simple. Maybe what we have seen so far is just the tip of the iceberg, an insidious crisis staring us in the face that we refuse to properly identify and deal with.

It’s been suggested we need to change course and correct the way Congress is run. A good idea, but if we merely tinker with current attitudes about what role the federal government ought to play in our lives, it won’t do much to solve the ethics crisis. True reform is impossible without addressing the immorality of wealth redistribution. Merely electing new leaders and writing more rules to regulate those who petition Congress will achieve nothing.

Could it be that we’re all looking in the wrong places for a solution to recurring, constant, and pervasive corruption in government? Perhaps some of us in Congress are mistaken about the true problem; perhaps others deliberately distract us from exposing the truth about how miserably corrupt the budget process in Congress is. Others simply are in a state of denial. But the denial will come to an end as the Abramoff scandal reveals more and more. It eventually will expose the scandal of the ages: how and to what degree the American people have become indebted by the totally irresponsible spending habits of the U.S. Congress-- as encouraged by successive administrations, condoned by our courts, and enjoyed by the recipients of the largesse.

This system of government is coming to an end-- a fact that significantly contributes to the growing anxiety of most Americans, especially those who pay the bills and receive little in return from the corrupt system that has evolved over the decades…

Arrest warrant out for Chris Sky in Manitoba

MASSIVE AWAKENING! - Fauci Is Getting EXPOSED!...

Capitol riot lawsuits: Only one out of 400 has accepted a plea bargain

WOW! It's ALL Falling Apart NOW!