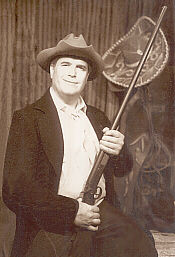 Everyone owned a gun in the Old West.
In the days of the Old West, no one would have ever imagined being without a revolver, a shotgun, or a rifle close at hand. What has changed? Why do so many people cower at the sight of a gun and demand that the government pass laws prohibiting anyone from carrying one?

Crossing the frontier and settling somewhere in the West required guts and determination. The hardships of a harsh climate and a rugged land, along with threats from hostile Indians, wild animals, and outlaws required the pioneers to be extremely self-reliant. No one could truly count on the government for help when it was needed the most. The Cavalry seldom came to the rescue in time to prevent a threat, and the people had to rely on themselves and their own weapons for their safety. A gun was their most reliable weapon to combat the dangers of the time.

Today, you still can't trust the government to prevent a crime against you, or to quickly provide aid to you after a crisis. Recent events on the Gulf Coast only emphasize the truth of that premise. But people have become lulled by the politicians and other engineers of our society into thinking that Socialism and expecting Big Brother to watch over you is better than being personally strong and prepared, self-sufficient, and willing to deal with problems for yourself. Many think that passing another law will prevent a criminal from victimizing them. Many believe someone else should be responsible for handling the difficulties of life for them, and they are quick to blame and point their fingers at the government when things go wrong.

But "the government" is made up only of people who are just as fallible, and often even more incompetant at what they do, as the rest of the people who pay the taxes that provide their salaries. The real problem is that most of the population has been programmed to be dependent on the government by the Socialist government educational system, the liberal-dominated media, and the workers in government offices and bureacracies at every level. These people would discover it was actually necessary to find productive work if they couldn't maintain their extortion schemes and deceptions for some reason. Talk about conflicts of interest!

And in the process, average citizens have lost confidence in themselves and believe they have to have someone else protect them from all the "bad guys" who own guns. Instead, what we really need now is some good ol' Western courage and self-confidence, a gun in every home, and people who know how and when to use those guns properly.

2 Comments in Response to Guns on the Frontier

Yeah, I know... context is everything. In the context of your 'article', back in the good 'ol days we called them 'injuns'... even back then we 'Americans' had gotten sloppy with our language...

But still, they are people too. In the five years I lived in AZ I met many-score an upstanding "native" for each individual who held true to any stereotypical image of what an 'injun' should be.

And previous to '01 I'd never met a 'native American', or whatever you want to call our aboriginal settlers here.

I personally think they have good reason to be pissed-off at us whettos.

Just wait until the NWO makes Americans the Indians, at that point you might have some apathy?