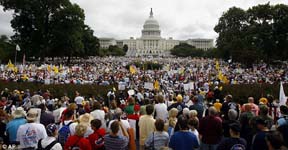 A phenomenon took place in Washington, D.C. on Saturday September 12, 2009 that frankly I never believed would, nor could have, ever taken place in America. For one day at least, from my perspective, the good guys (politically, not necessarily morally, and certainly not racially) took over. It was the day that I have been waiting for, the day when just decent, God fearing, flag waving, hard working Americans said, “We’ve had enough and we’re not taking it any more,” and they were willing to get off the couch and go to the nations Capitol in throngs, 1.5 million or more of them, even though MSNBC reported tens of thousands, and put their bodies on the line for the liberties that their forefathers and fathers bled and died for.

I had watched those who were willing to put it all on the line to gain their civil liberties as they stood that August day in 1963 and listened to Dr. Martin Luther King deliver what may be one of the greatest speeches in history. And then there was that day in October 1995 when Louis Farrakan delivered that mass of human flesh in the “Million Man March” to Washington.  But this was different.

First, it was organized by some nobodies. Whoever heard of the Freedom Works Foundation or the Tea Party Patriots or the National Tax Payers Union? And then they really didn’t have any big hitters as far as nationally known speakers. Dick Armey isn’t even a Congressman anymore and Congressman Mike Pence from Indiana isn’t really that well known even in Indiana. All I can say is, well thank God the sleeping giant may have finally awakened and if it has the “libs” are in big trouble come the next few elections. Remember the conservative broom that swept them out when Reagan was elected? If the Republicans will put up some Constitutionalists to run against this liberal, socialist loving agenda crowd that is in there today we just might see it happen again come the next few elections.

Following is an eye witness report by Jim Grove, Pastor of the Heritage Baptist Church of Loganville, Pennsylvania, who was in Washington last Saturday along with some of the men from his church. Following that is an account from Pastor Aubrey Vaughan of a Tea Party in the State of Texas several ago and what it accomplished.

Many of us will never forget the throngs of people that stretched out in front of us as we arrived in D.C. a little after 8:00 A.M. Saturday morning September 12. We headed to the staging area for the march, which was several blocks away.  As we approached the staging area, yet a couple of blocks away, it was clear we were not going to get much further due to the volume of people.  The amount of attendees was amazing.  People had backed up filling streets, alleys and every sidewalk.

There were signs everywhere protesting every issue of the Obama administration's policies.  Issues such as cap and trade, healthcare, the stimulus, illegal aliens, government spending, etc.  There seemed to be no end to the creativity of the American people in sign making.  One said “Obamacare Makes Me Sick”; another said, “I’m Not Your ATM Machine.” As the march got on the way and we eventually were able to join, it was quite orderly with that amount of people.

Our group’s message of repentance was quite well received with many Amens and thumbs up.  The hat I was wearing "KJV 1611 Precious Old Bible" and the sign I carried "Jesus is LORD not Allah" got much attention as well.

As we were leaving the event, there were reports that the national news media was reporting 30 to 40, 000 in attendance.  However, a more accurate figure from those in an official capacity who were there was reported as 1.5 to 1.8 million.  Considering there were no big name speakers to increase the crowd, it was refreshing and encouraging to see that volume of people sacrifice to be in attendance and stand for conservative values.  Hopefully this momentum can be maintained and sweep this administration from office in the next election.

An Analysis of the Washington Tea Party

On September 12, 2009, 1.5 million people were estimated to show up in Washington D.C. for an ole’ fashion’ Tea Party. Presidential White House Spokesman, Robert Gibbs, made the statement: "I don't know who these people are."

The “Big Wigs” of Washington D. C. had no central moderate personality to sway toward their leftist direction. The leaders of the Tea party are regular activists without any “national” name ID. This movement seems to be the way God works in order to hold the spirit of Anti-Christ down until God’s time line is complete.

This reminds me of the 1980’s in Texas. The private schools were up before the Texas State officials. The plan was to regulate all the private schools in Texas. I had been traveling around the State for two years crying the “British Are Coming” but no one seemed to pay any attention. Maybe my voice or horse was not very pleasant. Maybe their own political action groups were sufficient to keep their conscience pacified. I know that during those days Texans were fast asleep concerning the undercurrent of government control on their lives and families, much like today. I had been actively involved since the early 1980’s. It seemed to me at the time all was lost.
Then one afternoon a phone call came about a Texas House committee meeting to discuss the regulation of all schools in Texas. In three days God sparked 500 “angry” people to show up in Austin Texas for one committee meeting. It so intimidated the chairman that he asked me to calm “my” people down. I looked around at mostly strangers to the political arena and said, “These are not my people”. The committee put off a vote for one month.

One month later 8000 people showed up at the committee meeting which was named the Austin Tea Party. In those days I was not the only one knocking doors to arouse the political awareness concerning Socialist minded State officials but few of us could get the fervor or unified support needed to hold down that spirit of Anti-Christ. During that one month the fervor grew, a measure of Liberty was won, and only God gets the credit. It is interesting to note that some of the “leaders of compromise” attempted to take the credit for it all by getting in front of the crowd on that 8000 person Tea Party day.

God answers prayer. Those who have prayed and worked to see America survive have a little light to follow. Notice I said survive not Revive. America has gone too far to escape the judgment. But maybe we can hold it off for the sake of our children and grand children. At any length I am glad to serve a merciful God that helps us keep hope alive for a better day. Remember, “Independent groups with no central leader working together for one purpose! “