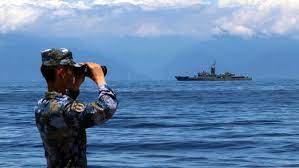 The Chinese government is escalating tensions with Taiwan following a visit to the island nation by U.S. House Speaker Nancy Pelosi (D-Calif.)

Last week prior to her visit, the former editor of the state-run Global Times, a Chinese government propaganda mouthpiece, essentially threatened Pelosi's plane with being shot down, while other official sources also used bellicose rhetoric as the ChiCom government announced and launched 'snap' military exercises.

"If US fighter jets escort Pelosi's plane into Taiwan, it is an invasion. The PLA has the right to forcibly dispel Pelosi's plane and the US fighter jets, including firing warning shots and making tactical movement of obstruction. If ineffective, then shoot them down," Hu Xijin said in a tweet that has since been taken down for violating the platform's rules.

Other Chinese officials made similarly threatening remarks, with CNN reporting that Chinese President Xi Jinping issued a stern warning to President Joe Biden over the visit.

"Public opinion shall not be violated, and if you play with fire you get burned. I hope the US side can see this clearly," Xi reportedly told Biden, according to a CNN report.

Taiwan was also hit by a cyberattack, according to reports, as Chinese warplanes flew near the island's boundary in the Taiwan Strait.

"Taiwanese authorities confirmed Tuesday that the Office of the President's website fell victim to an overseas cyberattack that caused the site to be down for 20 minutes, according to local reporters. The president's office reportedly confirmed that Tuesday's attack traffic was 200 times that of a normal day," Fox News reported.

Human Cyborgs are Just the Beginning.

FBI Singles Out Conservative Agents In 'Purge,' Retaliates Against Whistleblowers...

'Range Anxiety' - How Far Can An EV Go On One Charge?

GUN OWNERS SHOULD SEEK TRAINING TO IMPROVE THEIR FIREARMS SKILLS

Navy Attempting To Remove Sailor Who Refused Vaccine Under 'Pretext'...

Snowden Didn't Flee to Russia: Obama Trapped Him There

Our Emperor Has No Brain

THE QUESTION EVERYONE SHOULD BE ASKING:IS ALL OF THIS INTENTIONAL?