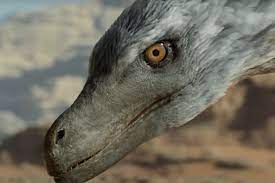 On a remote beach, newly hatched turtles are scrambling through the sand for the safety of the water. But they've been spotted by a predator.

Stalking on its long hind legs, the hunter approaches with curiosity. Its talons are like machete blades, its teeth like daggers.

But it's a juvenile itself and has never seen a turtle.

The baby Tyrannosaurus rex places one tentative claw on a turtle and watches in bemusement as it wriggles free. Alarmed, Tiny Rex runs up the beach, back to the safety of its parent – a fully grown male Tyrannosaurus, 40ft long and weighing ten tons.

The father nuzzles his infant, rubbing the sides of his jaw along the baby's furry flanks, and then gives him a nudge, urging his offspring to try again, as if to say, 'Go on, it won't bite.'

As touching as it is astounding to see, the scene is made perfect by the voiceover – from the doyen of wildlife narrators, Sir David Attenborough. 'He's got the killer instinct,' chuckles the great broadcaster, as he watches the dinosaur's clumsy attempts to catch a snack, 'but his problem is inexperience.

'This could take some time.' After recording his commentary, Sir David takes off his headphones and sits back in amazement. 'It was like I was watching them through a pair of binoculars,' he marvels.

The clip is part of Prehistoric Planet, the most ambitious series about dinosaurs ever made. A collaboration between BBC Studios Natural History Unit and a team of special effects wizards headed by Emmy-winning producer Jon Favreau, who's directed Marvel films (and appeared in them as Iron Man's friend Happy Hogan), it re-creates dinosaurs from 66 million years ago, shortly before a meteorite hit the Earth and wiped them out.

What Did Albert Einstein, Da Vinci, and Steve Jobs Have in Common: Dyslexia