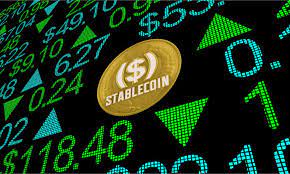 TerraUSD, a prominent stablecoin, broke its peg with the dollar and is now trading at near zero which has precipitated a wider crash and even blue-chip cryptocurrencies are suffering.

The significant crash in TerraUSD, which is backed by an algorithm rather than real assets, has prompted people to consider the future of stablecoins more generally.

We look at what prompted a collapse and what it means for stablecoins and the wider crypto market.

What are stablecoins and how do they work?

A stablecoin is a type of cryptocurrency that is tied to real-world assets like the US dollar.

They were developed partly in response to the volatility seen in other cryptocurrencies like bitcoin, whose value oscillates constantly, but now stablecoins are starting to crash.

They are based on similar blockchain technology to cryptocurrencies but they are built to offer more stability.

Then there are algorithmic stablecoins which aren't backed by any asset. They use a computer algorithm to keep the value from fluctuating too much. It can issue more coins when its price increases and buy them off the market when the price goes back down.

Traders tend to buy stablecoins which are accepted on crypto exchanges and these are then used to buy and sell other cryptocurrencies more quickly.

How The Qualities Of Bitcoin Baffle Nocoiners