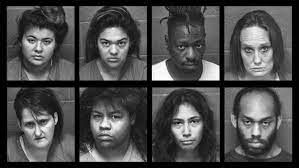 A 15-year-old Texas girl was rescued by police 10 days after she was kidnapped at a basketball game while using the bathroom, then trafficked by pedophiles.

The unidentified teenager's father raised the alarm shortly after she left to use the restroom and didn't return to her seat at a Dallas Maverick game in the American Airline Center on April 8.

The girl's family said they pleaded with Dallas police to investigate but the department failed to do so due to Texas Family Code Laws.

Those treat missing teenagers as runaways unless there is evidence of kidnapping. It is unclear if cops made any effort to track down surveillance footage of the girl's abduction, further details of which have yet to be shared.

The victim was only tracked down by Oklahoma City Police at an Extended Stay America Hotel after a counter-trafficking nonprofit found her nude pictures on a prostitution website.

'My heart breaks for the unimaginable things my daughter had to endure for the 11 days she was taken, and I am so glad she is safe as we work towards her recovery,' the girl's mother said in a statement.

Eight people have been arrested in connection to the crime, Fox News reported.

The girl's father immediately notified the stadium and security after the girl failed to return to her seat.

On the day of the abduction, she was seen leaving the arena with men.

The father was instructed by authorities to return home. Despite calling daily for an investigation to be opened, the family attorney said that Dallas Police refused to do any effort to find the girl.

Human Trafficking at an All-Time High in the U.S., the #1 Destination in the World...