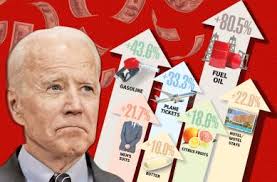 Hawley asked Granholm whether she thought the rising price of gasoline was "acceptable," to which she said "it is not, and you can thank the activity of Vladimir Putin for invading Ukraine, and pulling--"

To which Hawley said "With all due respect, Madame Secretary, that's utter nonsense," adding "The average gas price in my state was $2.07. Eight months later, eight months later, long before Vladimir Putin invaded Ukraine, that price was up over 30%, and it's been going up consistently since."

"What are you doing to reverse this administration's policies?" Hawley asked, to which Granholm replied: "It is not the administration policies that have affected supply and demand."

Hawley didn't let her get away with it - shooting back: "From January to August, the price of gasoline was up 30% in my state alone. It's been a continuous upward tick since then. And here's what your president did when he first came to office; he immediately re-entered the Paris Climate Accord, he canceled the Keystone pipeline, he halted leasing programs in ANWAR, he issued a 60-day halt on all new oil and gas leases and drilling permits on federal lands and waters - that's nationwide, that accounts by the way for 25% of US oil production, he directed federal agencies to eliminate all support for fossil fuels, he imposed new regulations on oil and gas and methane emissions.

Those were all just in the first few days! Are you telling me it's had no effect?"

Secretary Granholm tries to repeat Biden's bogus "Putin Price Hike" talking point and it... does not end well for her...

"That's utter nonsense," says @HawleyMO. Long before Putin invaded Ukraine, "from January to August the price of gasoline was up over 30% in my state..." pic.twitter.com/nM809xJove

How Bad Were Recessions Before the Fed? Not as Bad as They Are Now

US stocks plunged after data underscored a grim consumer profile...