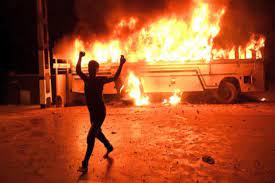 Needless to say, their complaints did not get much traction, and in the meantime food prices have only exploded to fresh record highs, far surpassing the levels hit in 2011 when riots against, you guessed it, food prices toppled most MENA political regimes (not without some CIA backing).

And as food prices keep rising, the protests across poor nations keep escalating, and on Thursday protests broke out in Iran leading to at least 22 arrests, after the government cut subsidies for food, sending prices through the roof as authorities braced for more unrest in the following weeks, Fox News reports.

In videos shared on social media, protesters can be seen marching through Dezful and Mahshahr in the southwestern province of Khezestan, chanting "Death to Khamenei! Death to Raisi!" referring to Iranian President Ebrahim Raisi has promised to create jobs, lift sanctions, and rescue the economy.

Iranian state media has not publicly addressed the protests, but they have been covered by the National Council of Resistance of Iran, an opposition group. Footage shared by the NCRI shows protesters setting fire to a Basij military base in Jooneghan, a city in the Central District of Jooneghan county.