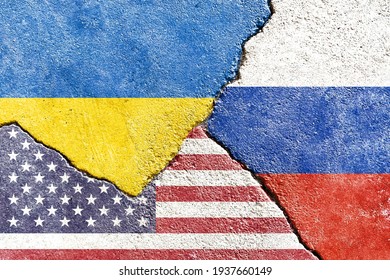 This is the message Russian President Vladimir Putin is sending, backed by the 100,000 troops Russia has amassed on Ukraine's borders.

At the Kremlin last week, Putin drew his red line:

"The threat on our western borders is … rising, as we have said multiple times. … In our dialogue with the United States and its allies, we will insist on developing concrete agreements prohibiting any further eastward expansion of NATO and the placement there of weapons systems in the immediate vicinity of Russian territory."

That comes close to an ultimatum. And NATO Secretary General Jens Stoltenberg backhanded the President of Russia for issuing it:

"It's only Ukraine and 30 NATO allies that decide when Ukraine is ready to join NATO. … Russia has no veto, Russia has no say, and Russia has no right to establish a sphere of influence trying to control their neighbors."

Yet, great powers have always established spheres of influence. Chinese President Xi Jinping claims virtually the entire South China Sea that is bordered by half a dozen nations. For 200 years, the United States has declared a Monroe Doctrine that puts our hemisphere off-limits to new colonizations.

Moreover, Putin wants to speak to the real decider of the question as to whether Ukraine joins NATO or receives weapons that can threaten Russia. And the decider is not Jens Stoltenberg but President Joe Biden.

In the missile crisis of 60 years ago, the U.S., with its "quarantine" of Cuba and strategic and tactical superiority in the Caribbean, forced Nikita Khrushchev to pull his intermediate-range ballistic missiles, which could reach Washington, off of Fidel Castro's island.

Russia Could Invade Ukraine This Weekend

If only our Covid healthcare was as good as El Salvador

The Jetson One: A personal flying vehicle just for having fun – WOW! I want one!

Is it Time for Intellectuals to Talk About God?

The Fauci Wing of the Libertarian Party

A Great Opportunity to Restore the Republic

'Once in a THOUSAND years explosion':

Rand Paul asks if YouTube will 'kiss my .... and apologize' as the CDC revises...