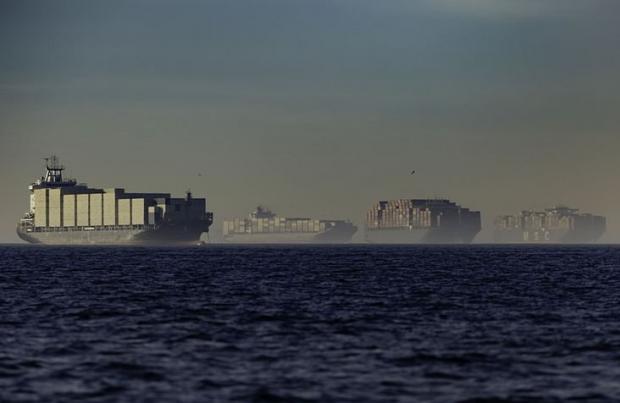 But new shipping data shows snarled supply chains are worsening, and it could take months to untangle them.

FreightWaves' Greg Miller described a new queuing system for vessels as pure optics, which reduces the number of ships offshore of Los Angeles/Long Beach. He said ships are being placed in holding patterns further out into the ocean where they're out of sight and out of mind -- to prevent attention-grabbing aerial imagery of container ship logjams.

The new queuing system has divided vessels into a couple of categories: 40 ships anchored within 40 miles of the ports and 56 outside that perimeter. With the line continuing to get longer at the U.S.' largest containerized ports, the Biden miracle to save Christmas appears to be failing.

What's also worsening are wait times. It now takes 21 days, or three weeks, for a vessel to enter the twin ports, that's up from seven in August.

Biden's effort to reduce dwell times is not working, even after he announced a new directive for the twin ports in mid-October to operate on a 24/7 basis. We noted at the time, in a piece titled "Here's The Truth Behind Biden's 24/7 Port Operations Pledge," that the move would not save Christmas.

There's even more confirmation that disputes the president's claim supply chains are easing. FreightWaves' Clarissa Hawes said, "we are drowning on the landside by long lines and staffing issues at the terminals." She said a flawed appointment system and other efficiency issues for drayage truckers continue to plague the twin ports.

Microsoft Tumbles Despite Beating Across The Board

Tap crypto's potential with a pioneer in global payments