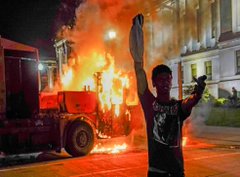 Apparently unwilling to wait for Black Friday discounts, roaming gangs of young men are descending on retail outlets and pharmacies in flash mobs, clearing out the store shelves in a matter of seconds as clerks look on helplessly.

In one pre-Thanksgiving raid, about 90 individuals stormed a Nordstrom outlet in Walnut Creek, situated in the San Francisco Bay Area. Members of the masked mob pepper-sprayed one employee, and assaulted another with a knife before making off with an estimated $100,000 in merchandise. Many of the looters made their getaway in some 25 vehicles parked out front.

Disturbingly, as this sort of mayhem unfolds in major cities across the country, liberals seem more preoccupied with determining how to define the criminal acts.

Lorenzo Boyd, PhD, Professor of Criminal Justice & Community Policing at the University of New Haven, and a retired veteran police officer, is just one academic who seems more obsessed with semantics than digging to the root of the problem.

"Looting is a term that we typically use when people of color or urban dwellers are doing something," Boyd remarked in an interview with ABC7 news channel.

"We tend not to use that term for other people when they do the exact same thing."

And by "other people" it is abundantly clear who Boyd is referencing.

Anarchy on the Upper East Side: