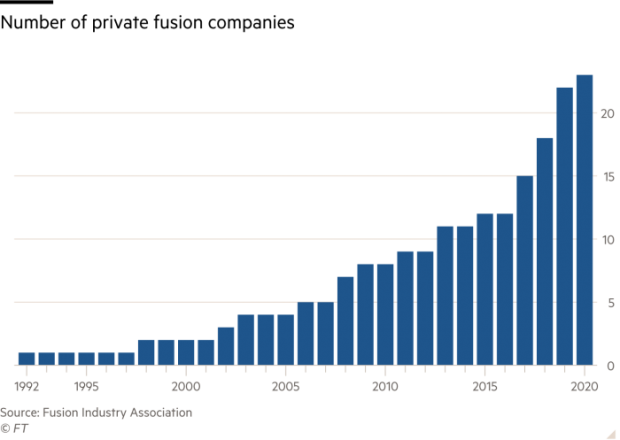 Private firms are now jumping into the race, and investors are ready to fork over huge amounts of cash for the best and brightest in the field.

For the past 100 years, commercial nuclear fusion has existed in a realm far closer to science fiction than to scientific practice. In fact, when English mathematician and astronomer Arthur Eddington hypothesized that our sun and stars generate their own power through a process of merging atoms to create massive amounts of energy, heat, and light just a century ago, he was very nearly dismissed as a quack. But since that time, nuclear fusion has advanced by leaps and bounds, from thought experiments to lab-tested experiments, and in the last few years, to major breakthroughs that hint that commercial fusion could really finally be just around the corner.

Nuclear fusion is sought after as the "holy grail of clean energy" because it is a totally clean energy source with the potential to create essentially limitless power with absolutely zero greenhouse gas emissions if the full power of fusion reactions can be harnessed by humans.

"Simply put, nuclear fusion is the process by which two light atomic nuclei combine to form a single heavier one while releasing massive amounts of energy, the International Atomic Energy Agency explains.

"Fusion reactions take place in a state of matter called plasma — a hot, charged gas made of positive ions and free-moving electrons that has unique properties distinct from solids, liquids and gases."

Texas' Power Grid "Could Be At Risk" Ahead Of Cold Blast

My Time in the Tank