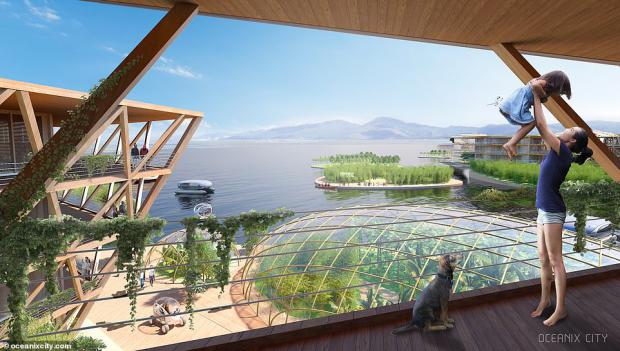 The world's first floating city will be built off the coast of South Korea by 2025 as a way for humanity to survive rising sea levels, project leaders have announced.

Backed by the UN, the floating city, built off the coast of the city of Busan, will be 'a flood-proof infrastructure' comprised of several human-made islands that all rise with the sea to eliminate the risk of flooding.

The self-sufficient city will generate electricity from solar panels atop buildings, produce its own food and fresh water, and ferry inhabitants between the island on futuristic boat pods.

It could also withstand natural disasters, including floods, tsunamis, and Category 5 hurricanes, as its floating platforms will be anchored to the sea floor.

Construction of the floating city, estimated to cost $200 million (£150 million), will soon commence thanks to a 'historic agreement' signed by Busan Metropolitan City of the Republic of Korea, UN-Habitat and New York designers Oceanix.

It remains unclear whether residents will be charged to live there, or how much the rent might cost. MailOnline contacted Oceanix for further information.

The company said work is still ongoing 'to determine who the residents will be and how they will be selected'.

The exact location of the floating island 'prototype' is also still to be determined, although just off Busan North Port is a likely option, according to Oceanix.

'Sustainable floating cities are a part of the arsenal of climate adaptation strategies available to us. Instead of fighting with water, let us learn to live in harmony with it,' said Maimunah Mohd Sharif, executive director of UN-Habitat.