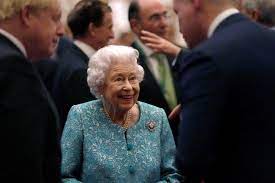 The lyrics come to mind whenever Queen Elizabeth is back in the news, which has been happening often in recent years, what with the Netflix series "The Crown," the death of her husband, Prince Philip, and the headline-hugging misadventures of her royal progeny.

The latest news, however — that the queen had entered a hospital "for some preliminary investigations" — raised a different level of emotion and anxiety, not fully relieved by the reassuring addendum that she "remains in good spirits." Even at 95, with 69 years on the throne, Queen Elizabeth is not someone who takes a sick day lightly.

In an era when old age and hereditary privilege are largely out of vogue, Queen Elizabeth is still held in lofty regard, as her consistently high popularity ratings testify. No other head of state has succeeded in melding the ancient rites of hereditary monarchy with democratic rule as she has.

There may be a dozen monarchies extant in Europe and about 27 countries with royal families around the world, but beyond their realms, few people are even aware that Norway has a king (Harald V) or can name the ruler of Thailand (Maha Vajiralongkorn Bodindradebayavarangkun), much less take seriously the "Romanov royal wedding" staged recently in St. Petersburg.

The Illusion of Democracy