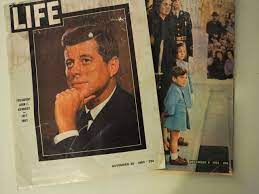 In 2017, former president Donald Trump released several thousand secret files on the assassination, but withheld others on national security grounds.

The White House said the national archivist needs more time for a review into that redaction, which was slowed by the pandemic.

Mr. Biden also said the delay was "necessary to protect against identifiable harm to the military defense, intelligence operations, law enforcement, or the conduct of foreign relations" and that this "outweighs the public interest in immediate disclosure."

The assassination of the 46-year-old president was a "profound national tragedy" that "continues to resonate in American history and in the memories of so many Americans who were alive on that terrible day," the statement said.

A 10-month investigation led by then-Supreme Court chief justice Earl Warren concluded that Lee Harvey Oswald, a former Marine who had lived in the Soviet Union, acted alone when he fired on Kennedy's motorcade.