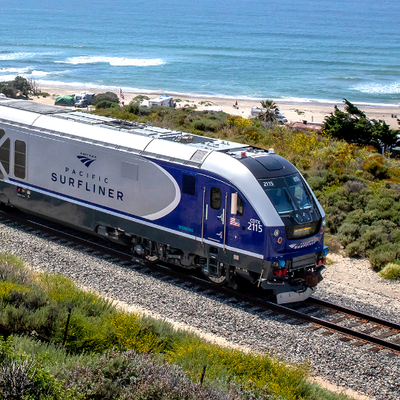 Amtrak's Surfliner line along the coast of Southern California will be severely disrupted over the next several weeks as emergency crews repair damage from erosion that destabilized the cliff that supports the tracks. The emergency work, which will take place near San Clemente, also disrupts service on the MetroLink commuter rail line which uses the same tracks.

In non-pandemic times, Surfliner, which runs from San Diego through Los Angeles up to San Luis Obispo, is Amtrak's second-busiest rail corridor, serving 2.7 million passengers in 2019. Between Amtrak and MetroLink, 43 trains a day use the tracks that have been shut down. It is also one of Amtrak's most picturesque routes, running right along the coast with incredible views.

But that proximity to the ocean, with tracks running atop a bed of sand and rock, is proving a liability as California's coast erodes, a problem that is only going to get worse in the coming years.

"Despite large uncertainty owing to both statistical fluctuations and scientific ignorance, I predict with confidence—a slow-rolling erosion shitstorm is coming to coastal SoCal," Bob Guza, professor at Scripps Institution of Oceanography at UC San Diego told Motherboard via email. "In fact, it already started."

Guza said that humans have drastically altered the Southern California coastal balance in the last 100 years. Among other things, rivers have been dammed for flood control, trapping sand that used to replenish beaches. And while cliff-top houses and railroads make for nice views, they're often shielded or supported by seawalls of rocks and boulders, which don't protect the cliff from erosion as well as sand does. And Guza added that over-watering of lawns and golf courses can lead to cliff failures, too.