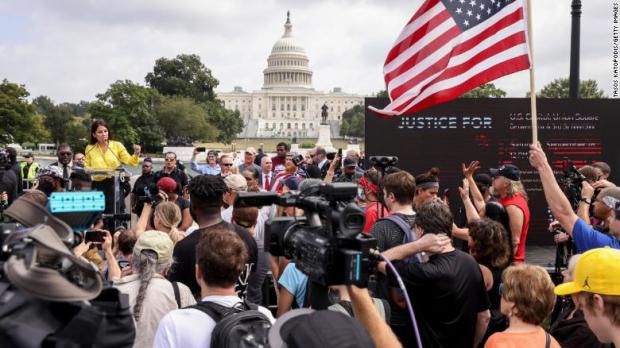 The protesters were easily outnumbered by reporters desperate for another "insurrection" story and by police officers who looked like they were ready for military combat.

Of the reported four people arrested at the event, one turned out to be an undercover FBI agent who was then escorted to "safety" by police after showing his badge. As conservative commentator Dinesh D'Souza Tweeted, the comedy of the event was that "there were so many undercover cops they were arresting each other by accident."

Earlier, former President Trump warned that the rally was a set-up by an FBI, Homeland Security Department, and Capitol Hill Police Department eager for more trophies in their war against "insurrectionists." He advised people to avoid the event and it appears their advice was taken.

They did not get their "Second Insurrection." In fact, as we know from the FBI itself, they did not even get their First Insurrection. Though the Left elites continue to use that term, the FBI affirmed last month that there was no organized plan among the January 6th protesters to overturn the presidential election.

The media's non-stop hysterical reporting about the January 6th "insurrection" – repeated endlessly by Democratic Party politicians – did serve an important propaganda purpose: anyone with concerns about the way the 2020 presidential election was conducted was immediately demonized and silenced.

ANALYSIS: Food rationing to be announced in America, followed by FOOD RIOTS and social...

An American Manifesto: Don't Let Everything For Which This Republic Stands Be Destroyed

Law No Longer Exists So Its Time We Create Our Own