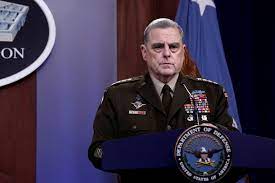 A series of dramatic inside-the-room accounts, including one in which the chairman of the Joint Chiefs promised to alert China's top officer if Trump was preparing to launch an attack, provides new insight into military leaders' response to the previous administration's fraught final period.

But Kori Schake, a scholar at the American Enterprise Institute, said the revelations that Milley covertly acted to counter his commander in chief are "bad for the military as an institution."

"It encourages people to do what Americans are already doing, which is viewing the military as they view the Supreme Court: apolitical when they agree with them, partisan when they don't," she said.

The latest exposé comes in a book by Washington Post journalists Bob Woodward and Robert Costa, who write that Milley, alarmed by the possibility Trump might strike China as he tried to stay in power, reached out to Gen. Li Zuocheng in the months surrounding the 2020 election in order to dismiss any Chinese fears of a preemptive American attack, they said.