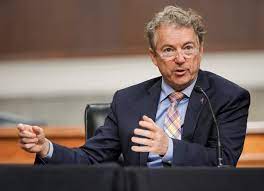 Kentucky Republican Sen. Rand Paul announced Tuesday he has been censored by YouTube, which he described as becoming an "arm of the government."

"We've had two speeches taken down, and this last one was, I think, a short speech," Paul told Just the News Tuesday on a conference call. "The access to the entire YouTube channel is no longer available."

A spokesperson for Paul explained that YouTube removed two of the senator's videos and suspended his account from uploading videos for seven days.

After the first video was removed, Paul recorded a second video outlining the science behind his statements on cloth masks and YouTube removed that video as well.

The conservative senator has steadfastly challenged Dr. Anthony Fauci's approach to the COVID pandemic, from mandatory masks to vaccine mandates.

Paul said the "real debate" surrounds what Congress can do to address censorship on platforms like YouTube, Twitter and Facebook. He noted that some conservative Republicans and Democrats in Congress want to break up "Big Tech" but he hasn't been a supporter of that position.

"I've actually been one who thinks private entities really do possess this power as part of private property, but it doesn't make me any less angry," he said. "And so I'll try to channel my anger, not in breaking these companies up, but by publicly expressing my disagreement with them and publicly promoting other places to go like LibertyTree.com, and also Rumble.com. I'm going to be posting on Rumble.com. All the things that are censored from YouTube will go on to Rumble."

It Takes A Lot Of Education To Keep Us This Stupid

Why Dave Chappelle is CANCELLED!