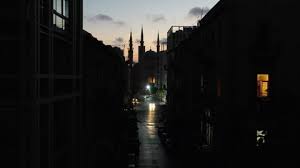 But as the country's economic crisis worsened, she lost her job and watched her savings evaporate. Now, she plans to sell her furniture to pay the rent and struggles to afford food, much less electricity or a dentist to fix her 10-year-old daughter's broken molar.

For dinner on a recent night, lit by a single cellphone, the family shared thin potato sandwiches donated by a neighbor. The girl chewed gingerly on one side of her mouth to avoid her damaged tooth.

"I have no idea how we'll continue," said Ms. Mustafa, 40, at home in Tripoli, Lebanon's second-largest city, after Beirut.

Lebanon, a small Mediterranean country still haunted by a 15-year civil war that ended in 1990, is in the throes of a financial collapse that the World Bank has said could rank among the world's worst since the mid-1800s. It is closing like a vise on families whose money has plummeted in value while the cost of nearly everything has skyrocketed.