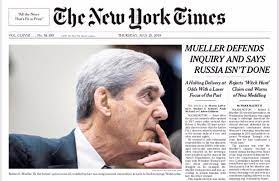 There were other factors in play, of course, but in retrospect, Mueller's performance was highly instructive.

An obedient Marine, Mueller saluted and followed orders from a corrupt Justice Department and an FBI with lots of shenanigans – and much worse – to hide. Not to mention the incessant "guidance" Mueller and team got from an equally corrupt mainstream media, drumming Trump-Russia perfidy into the consciousness of all Americans.

All Mueller had to do was delay announcing that he and his platoon of sharpshooter lawyers could find nothing to prove media accusations that Trump was in Putin's pocket. He slow-walked the investigation, allowing the Trump-Putin festering conspiracy charges to infect voters as they went to the polls in Nov. 2018. It worked like a charm. The Dems flipped the House.

Although visibly frail physically, Muller seemed to be fully compos mentis on May 17, 2017, when Deputy Attorney General Rod Rosenstein named him special counsel to investigate alleged collusion between the Trump campaign and Russia. No doubt he was aware he was being used. But with the corporate media singing his praises as "universally respected," what's not to like about seizing the limelight by ostentatiously appearing to shun it?