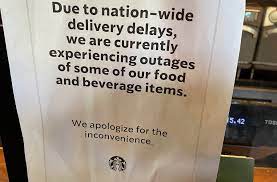 For the past several months, certain items have been missing in action from the menus of both chains. Starbucks is telling customers via its mobile app and in stores that "due to supply shortages, some items are temporarily unavailable."

Such items include green tea, which Starbucks customers are complaining has been in and out of stock on a regular basis for several months now. At Taco Bell, the situation is much the same with hot sauce packets in short supply.

The Louisville, Ky.-based Yum Brands, which owns Taco Bell, is blaming transportation problems associated with the Fauci Flu for customers not getting the imitation Mexican food condiments they crave.

"Due to national transportation delays happening throughout most of the industry, we may be temporarily out of some items," Yum Brands said in a statement. "Apologies for the inconvenience and we hope to feed fans' current Taco Bell cravings again soon."

Other chains such as Olive Garden are reporting similar shortages of everything from pickles to chicken wings. These are being blamed on "weather problems in Texas," among other excuses.