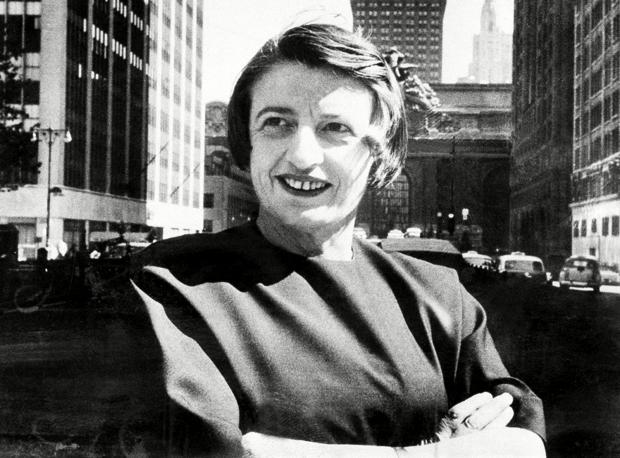 "Why carry the burden of creating something and then having to stand behind it and be proud of it? Why think and imagine and create your own way into the future of your most profound vision? Why bother? And why, therefore, allow others to do so for themselves and cause disordered, disharmonious ripples in the great silent lake of humanity? Pull them down. Make them equal. Make them empty." (my notes for The Underground)

The one glaring problem in Ayn Rand's work is the overall effect of her hammering mercilessly on behalf of freedom and the individual—after 400 pages, her prose takes on a programmatic aspect. It grips the reader with iron. The moral imperative to be free replaces the exhilaration of being free.

On the other hand, she obviously wrote her two great novels in the middle of a feverish exaltation. Every page burned. Most characters went down in flames. A few rose into the sky. She knew she was up against the most powerful forces of society, and she was not going to compromise or relent one inch. She fully intended to destroy collectivism at its root. On the basis of that decision, she refused to suspend her attack, even for a moment.

Most people who brush up against her work can't stop to consider the depth of her admiration for the independent and powerful and creative individual, or the nature of her aversion to the collectivist who can only borrow from such individuals, and then distort and undermine what they have misappropriated.

She means to be extreme. It is no accident. With no apologies, she splits the world down the middle. In her own way, she is an ultimate riverboat gambler. She shoves in all her chips on the self-appointed task of illuminating the great dichotomy of human history and modern life: the I versus the WE.