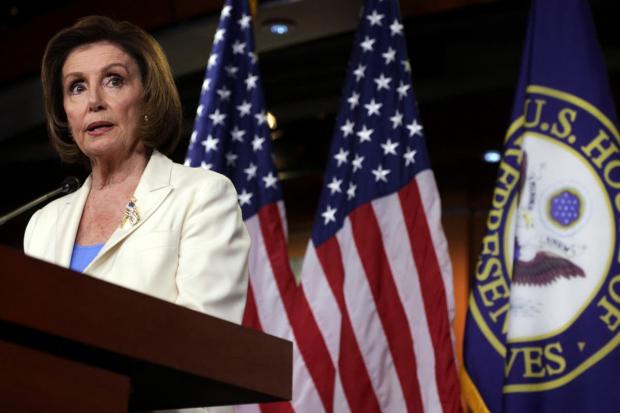 House GOP Leader Kevin McCarthy on Wednesday pulled all five of his nominees to the special committee investigating the January 6th MAGA riot after Speaker Nancy Pelosi rejected two of them.

Each side accused the other of playing politics with the panel tasked to study the origins and effects of the riot, which resulted in five deaths and damage to historic artifacts in the Capitol.

And each side feared with the other would ask: Democrats putting the focus on former President Donald Trump and his actions that day; Republicans questioning why there wasn't enough security at the Capitol, which would have fallen under Pelosi's purview as speaker.

McCarthy charged Pelosi with 'playing politics' and creating a 'sham process' with her decision to reject Republican Congressmen Jim Banks and Jim Jordan, both strong allies of Trump, from serving on the panel.

Both men voted to challenge certification of President Joe Biden's election victory and have promoted the 'big lie' - the false argument that Trump actually won in 2020 and was the victim of election fraud.

Pelosi said in a statement she made her decision based on the 'integrity' of the investigation.  As speaker, Pelosi has final say on who sits on the panel.

'With respect for the integrity of the investigation, with an insistence on the truth and with concern about statements made and actions taken by these Members, I must reject the recommendations of Representatives Banks and Jordan to the Select Committee,' Pelosi said in a statement.