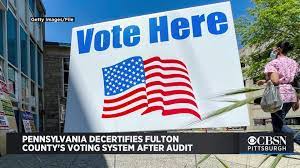 Acting Secretary of State Veronica Degraffenreid, an appointee of Democratic Gov. Tom Wolf, informed the Fulton County Board of Elections that she "did not arrive at this decision lightly."

Wake Technology Services Inc. (Wake TSI), a software company based in West Chester, Pennsylvania, had carried out an election assessment that involved its workers visiting Fulton County in December 2020 and in early February.

The company in May released a report that concluded the election was "well-run" and did not indicate any signs of fraud in Fulton County. However, five "issues of note" were uncovered, three of which are related to Dominion Voting Systems, whose electronic voting system was used in the county for the 2020 election.

"While these may seem minor, the impact on an election can be huge," Wake TSI said of the five issues. At the time, Dominion disputed the report's findings.

The Pennsylvania Department of State said in a statement on Wednesday that Wake TSI's access to the Fulton County's voting system "undermined the chain of custody requirements and strict access limitations necessary to prevent both intentional and inadvertent tampering with electronic voting systems."

It added that the "unauthorized access" prevents the vendor—Dominion—from "affirming that the system continues to meet state and federal certification standards."