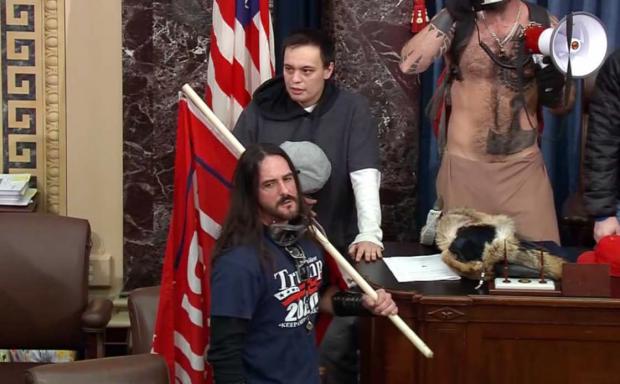 A Florida man who was seen carrying a large red "Trump 2020" flag on the floor of the U.S. Senate during the Capitol riot received eight months in prison Monday in the first felony sentence from the Jan. 6 attack.

Paul Allard Hodgkins, 38, of Tampa, was arrested Feb. 16 after the FBI received a tip identifying him among the hundreds of people seen in photos and videos inside the Capitol. He pleaded guilty in June to a single felony count of obstructing an official proceeding, which carries a maximum sentence of 20 years in prison.

"Although you were only one member of a larger mob, you actively participated in a larger event that threatened the Capitol and democracy itself," said U.S. District Court Judge Randolph Moss of Washington.

"The damage that was caused that way was way beyond a several-hour delay of the vote certification," Moss said. "It is a damage that will persist in this country for several decades."

Hodgkins' lawyer, Patrick Leduc, urged the judge not to impose a prison sentence, saying in a court filing that Hodgkins is "law abiding, hardworking, honest, caring, kind, thoughtful, generous, and the kind of person you would want for a neighbor." On the day of the riot, he "lost his bearings and his way ... made a fateful decision to follow the crowd, and found himself for approximately 15 minutes in a place that he sincerely regrets to have been," the court filing said.