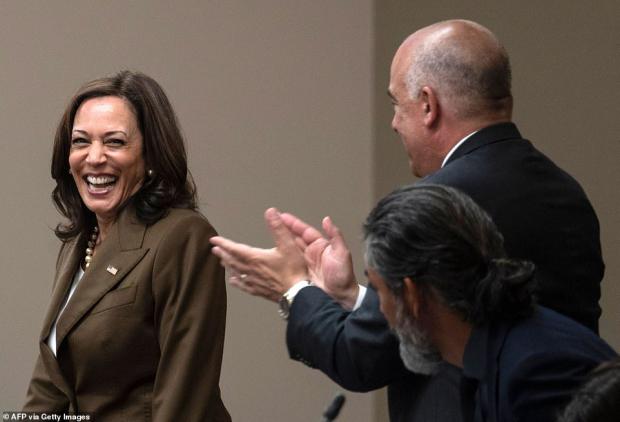 Vice President Kamala Harris met with the Texas Democrat 'fugitives' on Tuesday and gushed over their sacrifice even as their state senate passed the controversial voting restrictions bill.

The move wasn't enough to stop the Senate passing the legislation but the bill will now stall in the House due to the absence of a quorum.

On Tuesday, Harris made a pointed gesture of support Tuesday for the legislators who are on the lam after chartering private jets to the capitol to prevent enactment of new voting restrictions.

'I know what you have done comes with great sacrifice, both personal and political,' Harris told them, while she dropped in on a meeting the lawmakers were holding in D.C.

'Defending the right of the American people to vote is as American as apple pie, she said. She called their actions a 'courageous stand.'

The bill will end drive-thru and 24-hour polling places and ballot drop boxes, and give more power to poll watchers. Republicans say the measures will avoid voter fraud while Democrats say they disenfranchise minorities and the poor.

Harris' full-throated support comes even as the Texas House voting to arrest them when they return home.